We went into the hive recently to check on the state of the honey box, and we were shocked to see that it was almost full. These bees are not playing games when it comes to preparedness. It’s bad news for the impending winter, but it’s good news for honey! 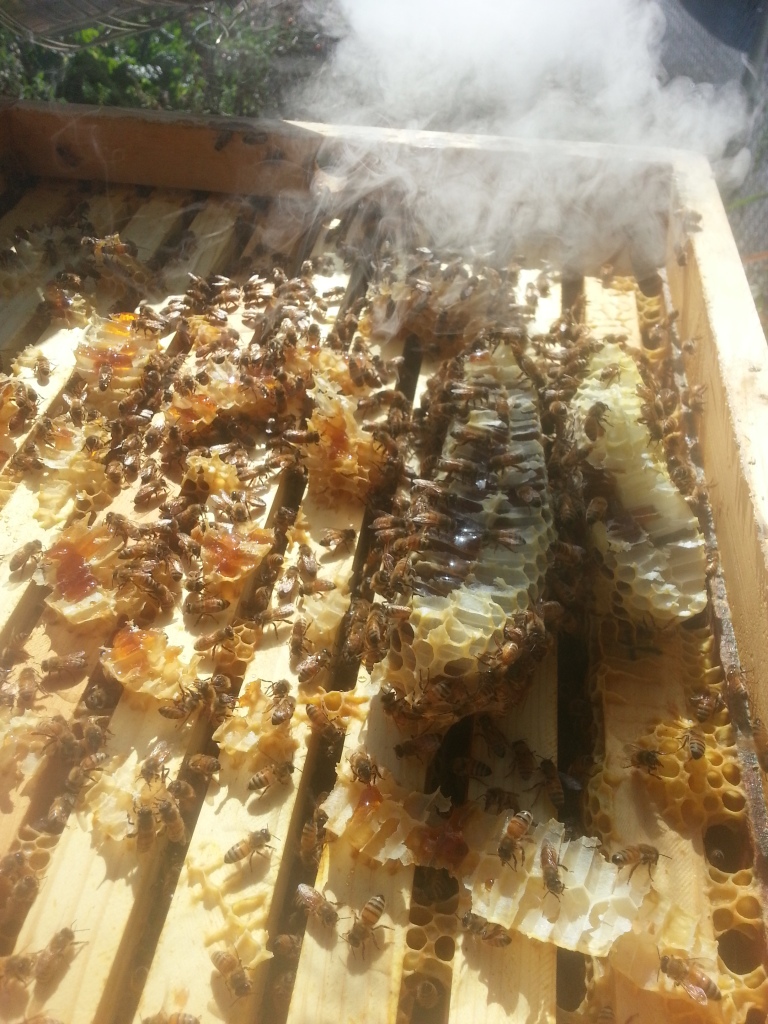 We threw in a triangle board and a shim and waited a few days. In that time the bees not only abandoned the honey box, they also set to work on filling in the shim with comb. I’ve been reading a lot about Bee Space lately. It’s the distance we leave between frames so we can pull each out individually without ripping through comb. About a centimeter, it’s the magic distance at which bees won’t fill things in. Bees are all about filling things in – any less than a centimeter is patched up with propolis to prevent drafts. Any more than a centimeter, as we can see here, is fair game for expansion and will be filled in with comb. They built all of this over the course of a weekend. Bees don’t get time off. 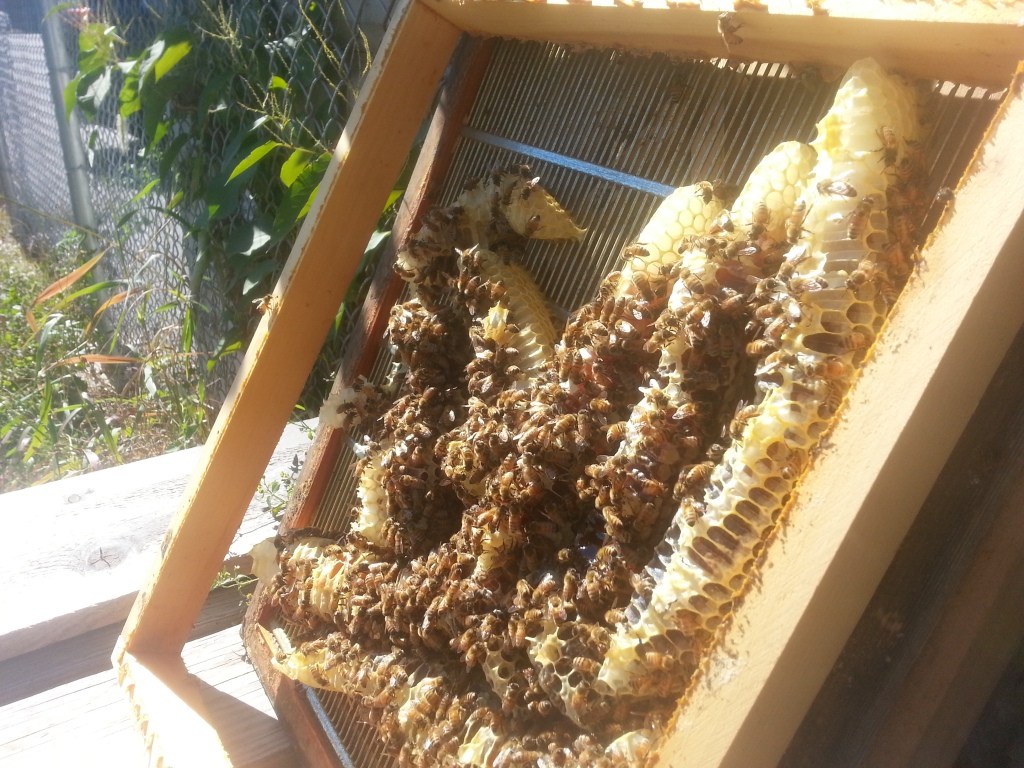 We made off with the honey box, just like last time. With all that burr comb we had to break apart to get inside, though, this theft was a little messier. Some of the equipment got sticky, and the bees were wise to it. As I was putting out the smokers, this little guy was frantically cleaning up a thumbprint of honey. 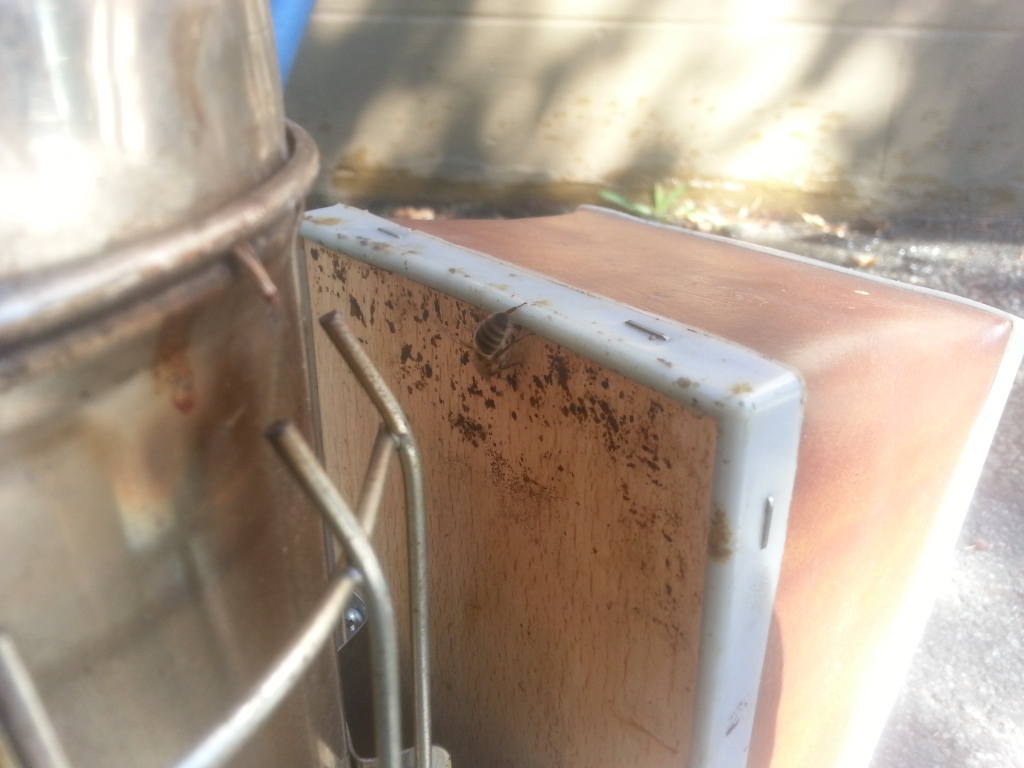 Soon after collecting the honey, we had one heck of a storm. The bees stuck it out like champs, but we were so afraid the hive would get toppled. The fact that we’d just removed the honey box and a foot of height may be what saved us. In order to sleep a little easier, we put up this windbreak. The hive is already nicely protected to the west by a picket fence, and the lattice is at an ESE angle that should break up any gusts coming up the river. 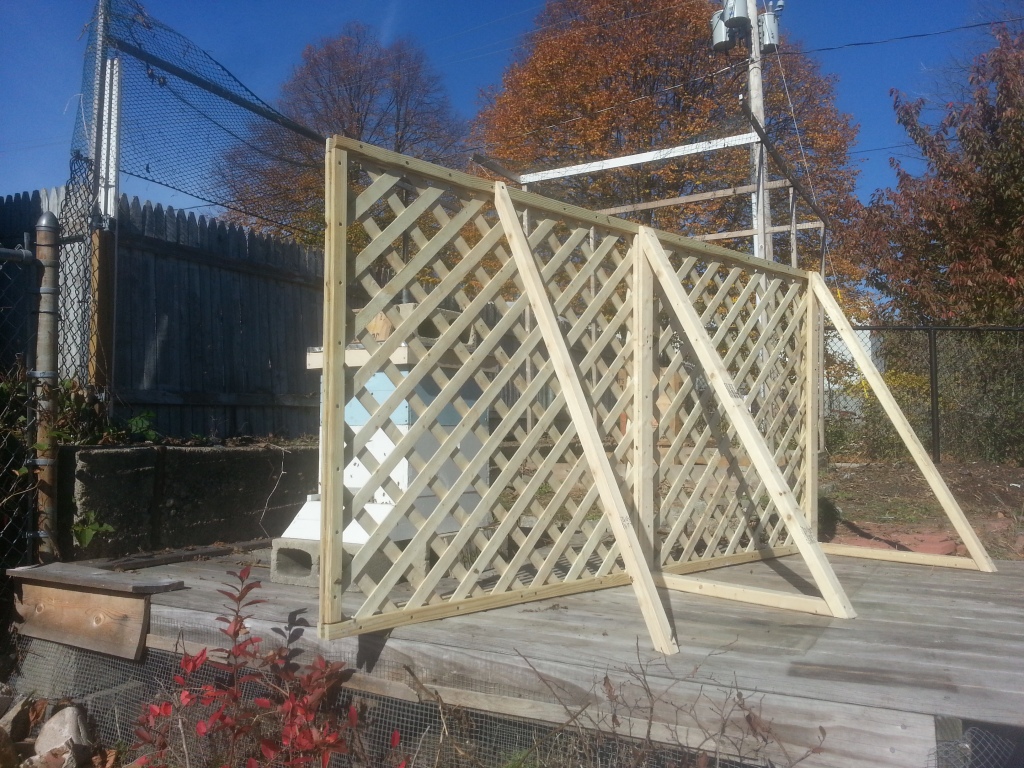 With the hive secure, we could turn our attention to more important things. Like honey! The bees had really done a stellar job collecting, and had filled and capped almost all ten frames. 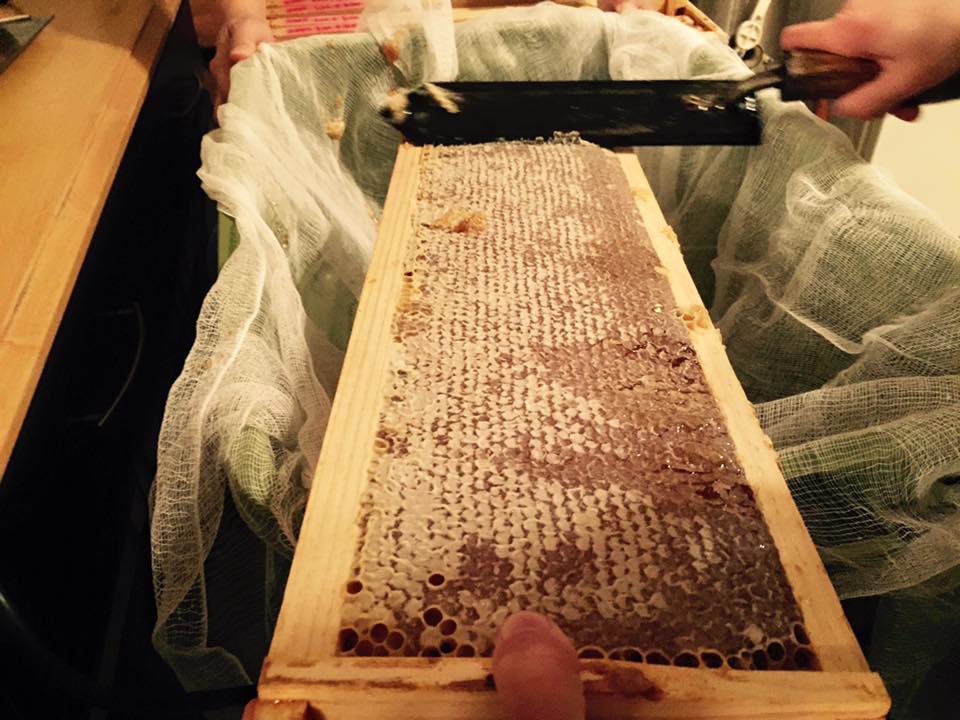 There were, sadly, a few casualties. 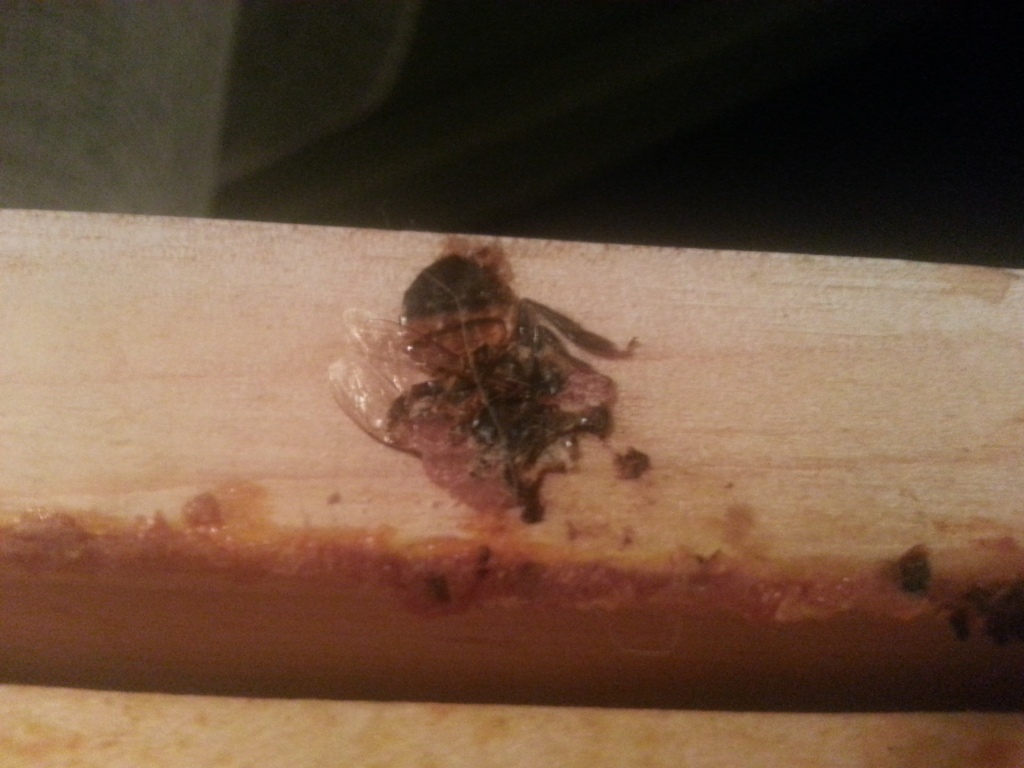 We made sure to get another hot knife. It uncaps frames like a dream. I did drip a drop of honey from it onto my hand, however, and I got decent burn from it. I’m a little worried the heat may affect the quality of our honey… 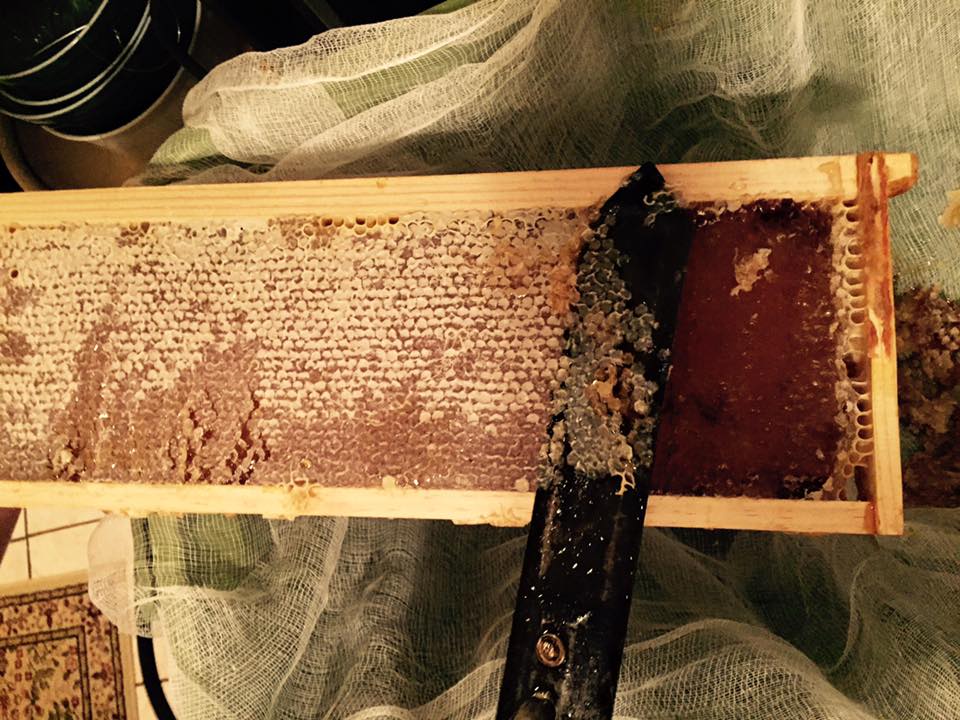 Heat notwithstanding, the honey is gorgeous. It’s so dark and rich it’s impossible to see through. Here it is dripping its way through our filter. Only in the thinnest spots, with the light shining straight through, does it approach a color I might be willing to call “honey.” 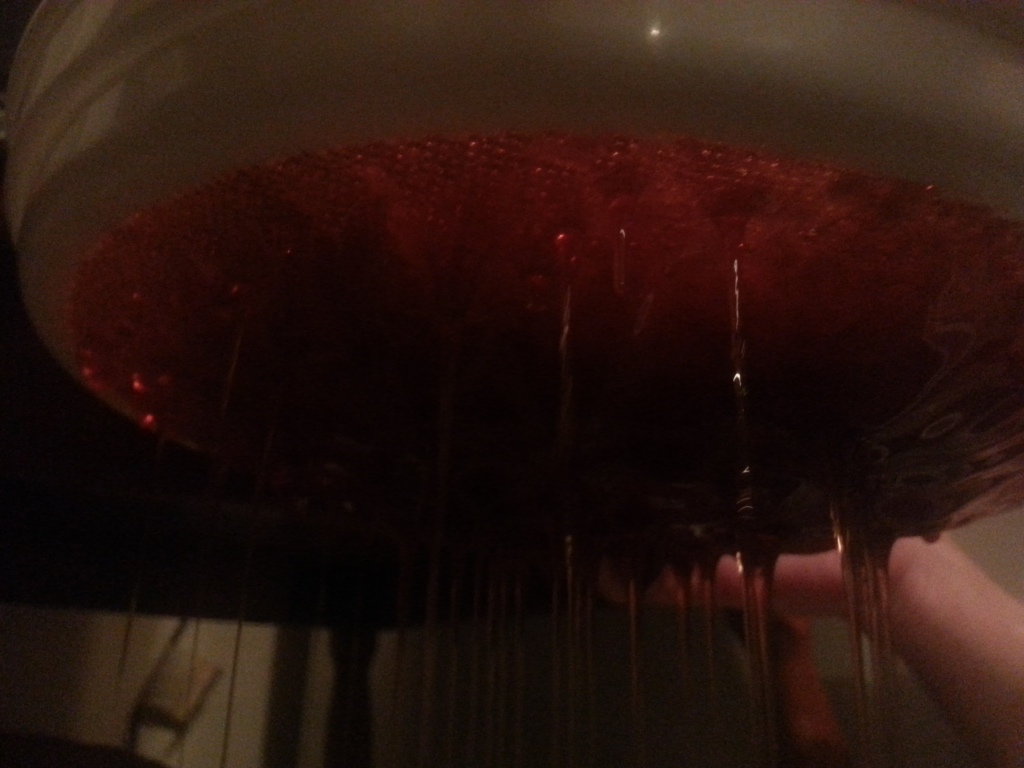 We’re pretty excited about it. 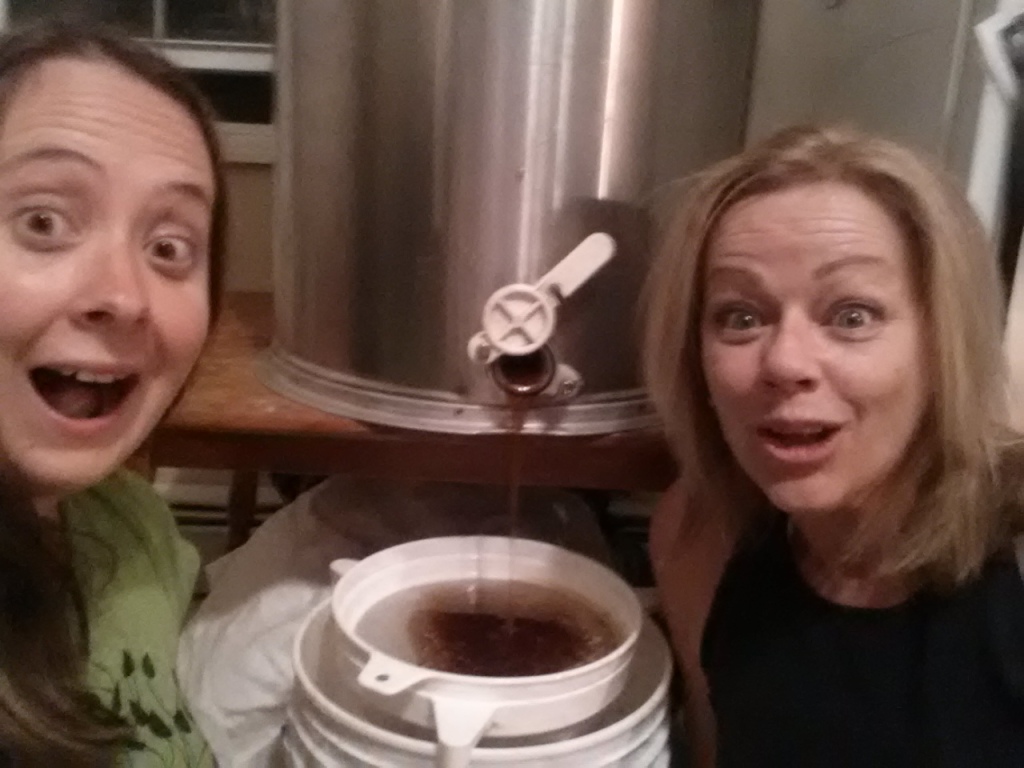 The garden is pairing with a fabulous and very locally-driven restaurant for a cooking class later this month. Kim is speaking at the class and I, purely by chance, won two free tickets to it in the garden’s fundraising raffle. Some may claim nepotism. I’m claiming that I put close to $30 worth of tickets in the cup. I also put my blood sweat and tears into this class, meticulously filling twenty little 3 oz bears to be given as favors.

The honey is the most impressive when you look at it next to the batch we harvested in the summer. I have almost a full jar because I’m a hoarder and can’t bear the thought of it disappearing forever. Both jars were collected from the same hive in exactly the same spot, but two months apart: the jar on the right on August 10th and the jar on the left on October 12th. The difference is, as far as I know, purely floral. Spring and summer mean delicate light flowers like pea and squash blossoms, but late summer and fall mean rougher, darker flowers like Black Eyed Susans and sunflowers. 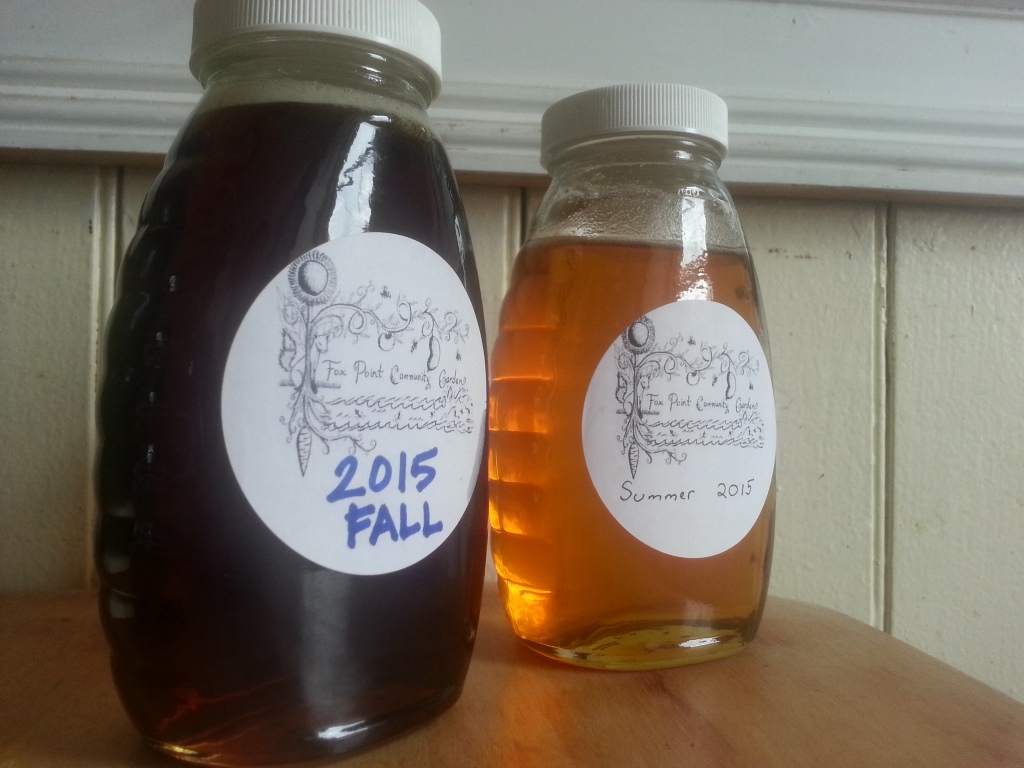 Am I making all this up? Maybe. But whatever the reason, this honey is so dark it’s almost black, and it tastes, I swear, like elderflowers. The summer stuff was great, but this is a world apart.

This summer I’m using Neptune’s Harvest Fish & Seaweed Fertilizer on everything I grow. It has great Amazon reviews, and it was available at the urban farm supply store where I talked so long with the owner I felt obligated to buy something. I’ve gone whole hog on ideas for much stupider reasons. 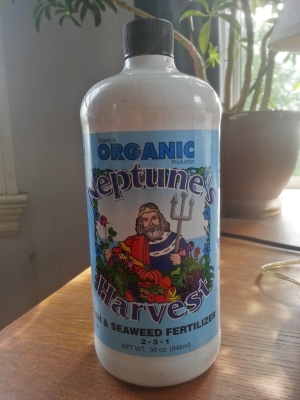 And I have to say, my garden does look a lot more impressive. 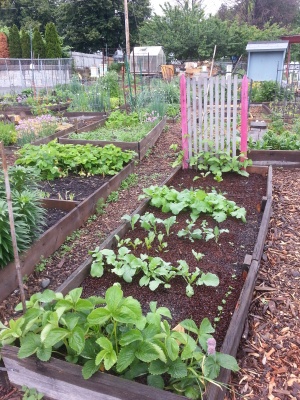 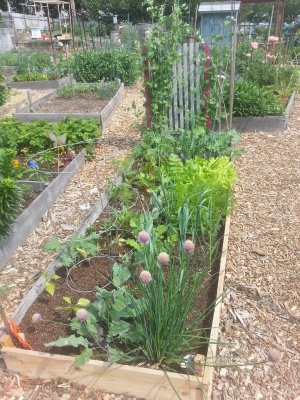 On the left we have last year at this time, and on the right we have this year, all fishified.

The fish-drenched guys are definitely further along. The chives are enormous, the greens at the far end are a solid mass, and the peas have completely escaped their trellis. Of course… last year I didn’t plant anything until I got my plot at the end of April. Most of the things in this year’s picture were planted indoors during a February snowstorm. There are more scientifically rigorous studies…

I’ve chosen two vegetables I know grow quickly. I don’t know anything that grows faster than radishes, but I’m worried the hot weather will set them back, so I’m planting beans as well. 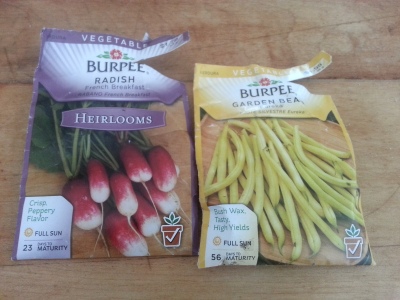 The Neptune’s bottle suggests soaking seeds before planting in a solution of 1 tsp fertilizer to 1 cup water. Do radish and bean seeds like to be soaked? I’ve never heard they do, but I’m doing it anyway! I’m also doing a control of seeds soaked in regular tap water. 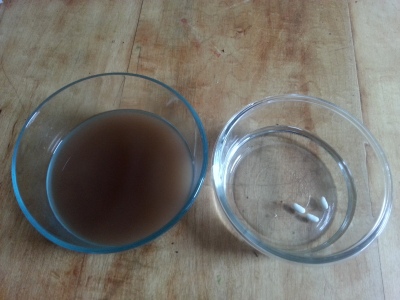 If you’ve never used fish fertilizer before, trust me when I say it smells just as good as it looks.

I let the seeds soak for 24 hours, then planted them. Another use for Neptune’s, and the one I’ve been using in my garden, is a simple watering with a very diluted solution every one to two weeks. So I sowed a set of each seed that will be watered normally, and a set that will be fished. If you’ve been doing your math, you’ll know that comes out to eight different treatments. 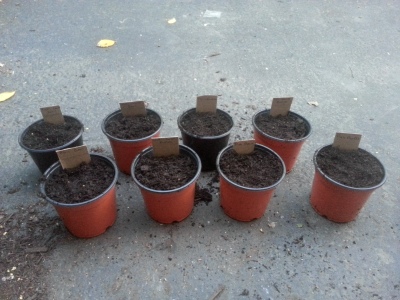 And here they are!

After only four days the radishes, true to form, were making an appearance. At least one plant emerged in every pot. 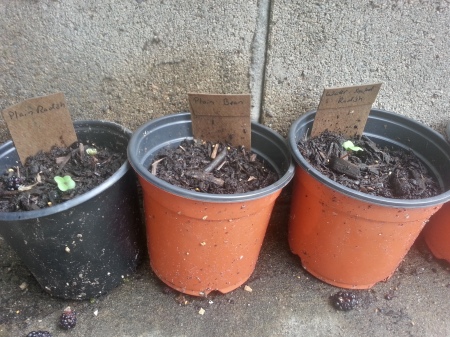 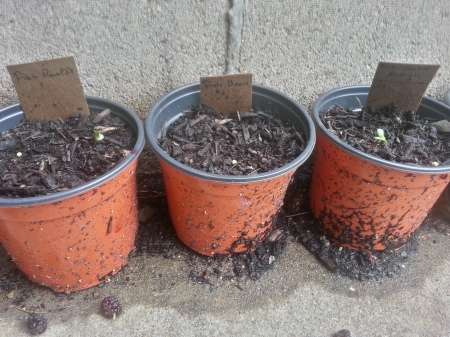 Go ahead and click on the pictures to enlarge them so you can see the seedlings and my beautiful labeling. The plain seedlings look more developed and vividly green. Their leaves are splayed out completely. Also, only the completely untreated pot has two of its three seedlings already. The fish seedlings, on the other hand, look yellower and not fully opened yet. This could be chalked up to a few hours’ difference in growth at this stage, but I really did sow everything in one go. Eagle-eyed readers may notice that there are berries just everywhere. They’re mulberries, and they’re getting a post of their own soon.

I’ll be tracking the seedlings’ growth and updating every now and again. If this current trend continues, maybe I’ll have enough evidence to bring down Big Fish.