Mango wine has been put on hold. Avid readers may remember that I was keeping twenty pounds of mangoes under my desk, waiting for them to soften. But it’s been a hot week, and my six gallon bucket had blueberries fermenting in it. So I, forward thinker that I am, moved the mangoes to the cellar, where they could keep nice and cool.

And something ate them!

I don’t know if was a badger, or a rat, or a man living in the walls, but whoever it is is well nourished now. I’ll have to buy some more when they’re softer in the store and I have a fermenter ready for them. And watch my back when I’m in the cellar.

But it’s not all tragedy on the wine front.

I freed up that 6 gallon bucket of blueberry wine and moved it to a carboy. I also learned from my strawberry adventure that even with the pump, regular old siphoning is a lot easier. Although it does look like an IV drip…

My mead also finally stopped its bubbling, and I moved it to a new carboy. It came up a little short, and I had to top it up with some water, which I hope wasn’t a mistake. That meant I only got to try a tiny bit that was left behind, but I was amazed at how… meady it tasted. Like something I might pay money for and not regret. Which is the goal, I suppose.

I learned my lesson from the sprouting strawberry wine and bought a pair of pantyhose to act as a filter bag for the grapefruit wine I started. I cut off one of the legs, jammed it full of grapefruit segments and zest, and then tied the end off.

The other leg is full of dried elderberries, which I ordered online. Apparently they were grown in Norway! I’ve since found a Pick Your Own farm in Connecticut that has them. Maybe I’ll go there and get a feel for what they look like before I start foraging mysterious roadside berries.

Last but not least, I racked the rhubarb out of that horrible Mr. Beer keg which, to its credit, did not leak out of any new places. I was right in resigning myself to no healthy pink blush. I wasn’t anticipating this color, though, which unkind critics might call “dishwater” but I’m choosing to call “pearl.” I’m really curious to see if it settles over time into something transparent.

Even after filling the carboy so high, there was a lot left over. And wouldn’t you know, it’s palatable! Very tart and crisp. I could see it being a decent summer wine. Which is too bad, because it probably won’t be done until the fall. 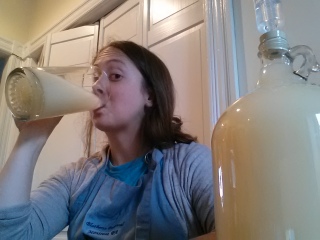 One thought on “Wine Progress”