Two bee posts in a row? But how?

Truth be told, my last post was about events of a few weeks ago. Today’s is about today. So, through blog magic, you get to see the results of nearly a month of honey box action!

Before going in, we always thoroughly smoke the bees. Using this great little steampunk contraption we slowly burn pine needles, pumping the bellows occasionally to create nice puffs of white smoke. Once you’ve let the needles burn for a few minutes, the smoke changes from hot to just warm and, for bees, intoxicating. It has a real calming effect on them that beekeepers have known about and exploited for centuries. And it really does seem to work.

After giving the bees a few minutes to get drowsy, we prised open the hive. We set the honey box aside for a moment and examined the top box in the hive body. This is where the queen ought to be laying and new bees growing up big and strong. These frames were covered in honey that had dripped down from the honey box. A very good sign.

We took a peek inside the top hive body: no sign of the queen this time either, but there was a huge amount of brood (egg cells), as well as larvae and some honey and nectar. Basically all evidence of a healthy and productive colony.

After that it was into the honey box.

We could tell just from lifting it that the bees had been at work. Honey ain’t light.

The honey box is working exactly as we were hoping it would. Of the ten frames, two and a half are completely filled with honey and capped, meaning the bees have declared it done and sealed it off for storage. All the rest of the frames have at least some honey in them. This couldn’t be going better.

The bees are working at a very fast rate, which means we have to take our next few steps fairly quickly. For one, we’ll want to add another honey box so they have plenty of room to expand and won’t slow down production or move honey storage back down to the hive body. For two, we’ll begin our honey extraction. We have a special excluder screen that fits under the honey box and allows bees out but not back in, because honey collection is easier when thousands of bees aren’t involved. 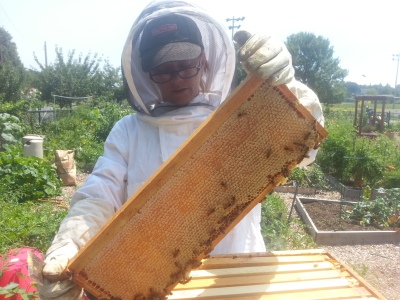 Or so I’ve heard.

I’ve cross-posted this one with the community garden’s blog, too. Go give it a read!

3 thoughts on “Honey on Tap”