It’s been six whole weeks since I made my cold process Castile soap. Since then it’s been living in a paper bag in my closet, getting turned over whenever I think of it.

But no more! According to my book, the bars ought to have cured to neutrality by now. This is an ordeal that takes only a couple hours using the hot process method, which I did using the exact same Castile recipe two weeks ago. Throwing caution to the wind, we took a bar to the kitchen sink. 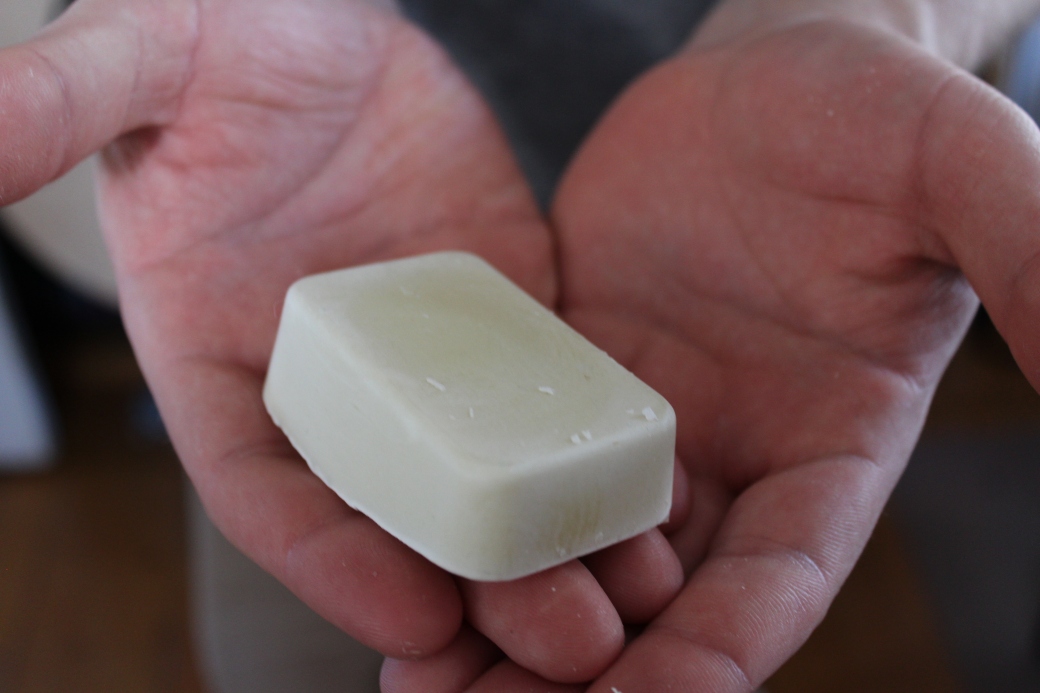 Ben, demonstrating a faith in my abilities I did not know he had, offered to go first. He says he doesn’t believe in acids or bases… I think it’s a joke. Either way, he’s going to have a PhD in science soon. 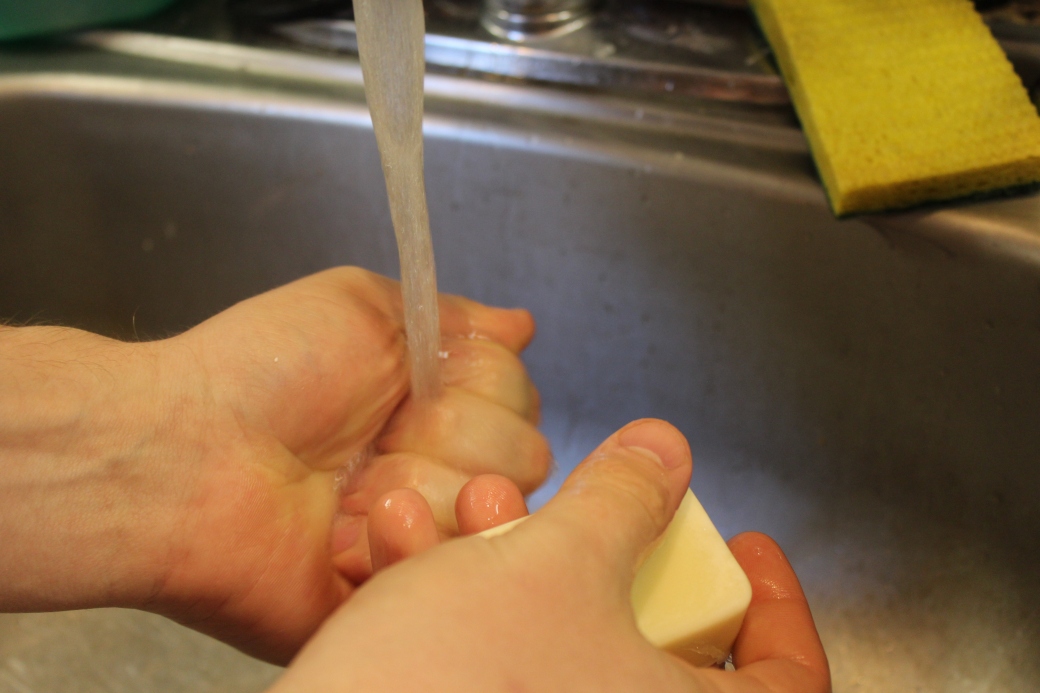 Ben seemed unscathed, so I went next. I noticed quite a few differences between this soap and its hot process counterpart. First of all, the color is totally different. When they’re dry, both have an eggshell look to them. As soon as the hot process got wet, though, it deepened to olive green, which makes sense given that it’s made of olives. This bar stayed the same shade, though.

It also seemed to work better as a soap. The hot process bar has a creamy, gloppy consistency that smears across the skin, while this bar maintains its integrity and works up a nice lather on its surface. I may not be being entirely fair, since the hot process soap lives in the shower now and might just be waterlogged. I’ll have to do a comparison with a fresh bar of each.

Lastly, and I don’t think this has to do with where they’re stored, the cold process bar is smooth. It feels great to the touch, like it was poured into its mold as a liquid. The hot process bar, on the other hand, feels like just what it is – a lumpy mess. It’s what marketers call “rustic.” 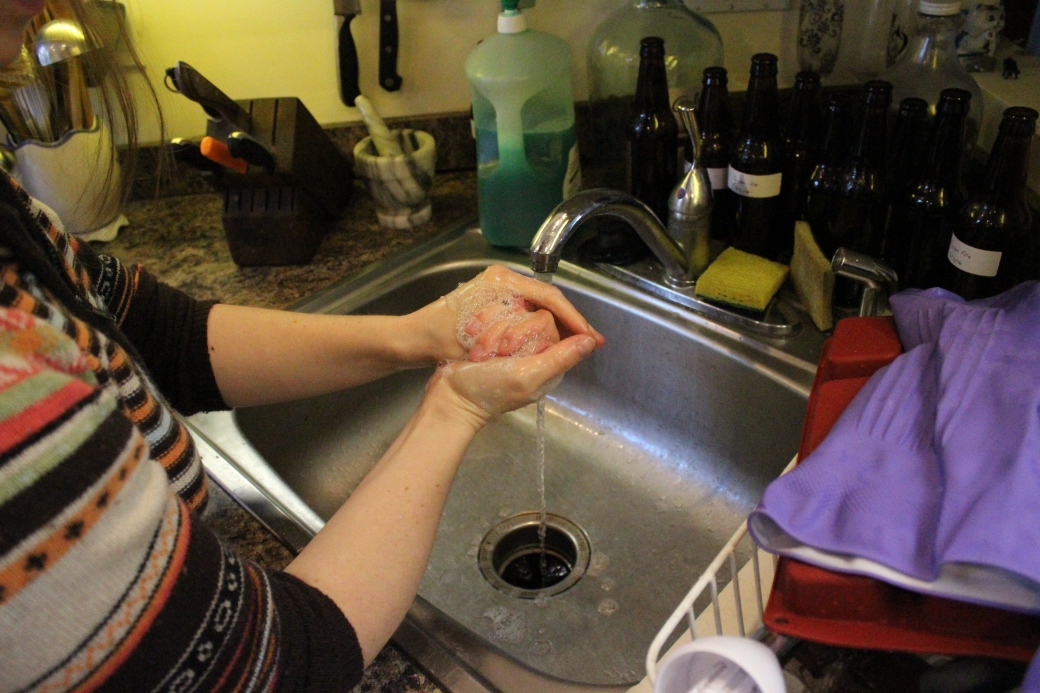 So which is better? All things considered, the cold process is a lot more pleasant. It’s prettier, feels better, and seems to have more integrity in its shape. But it does take six weeks, which is a terrible pain.

But what am I saying? I make wine, and I’d be ecstatic if I had a recipe that took only six weeks. And just like with wine, I’m sure that once you get a big enough backlog, you always have something to do. It’s just a matter of getting started. 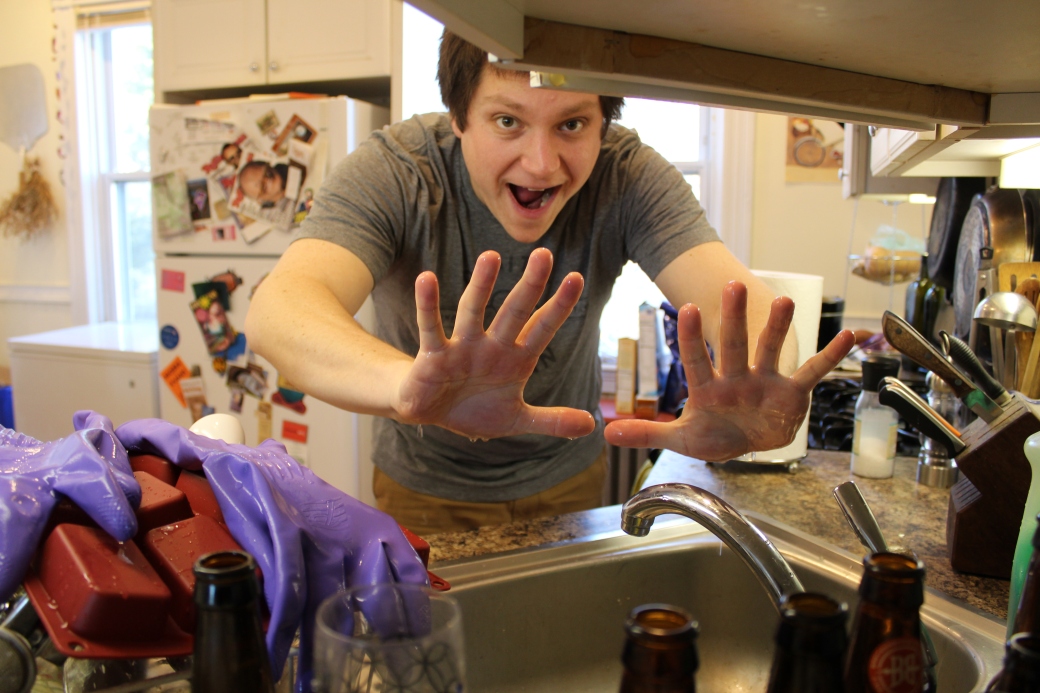 And getting over the fear of lye. Ben’s been telling me his hands are tingling, but I think he’s messing with me.