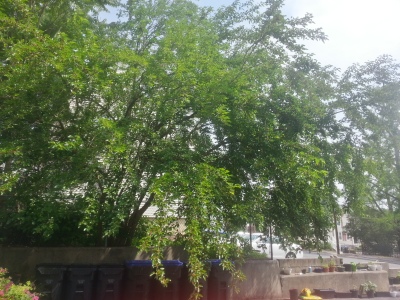 In a way, I’ve been making mulberry wine for two years now. The neighbors don’t have much going on in their yard, but they have one mulberry tree with production rates any orchard owner would be proud of. And it hangs mostly over our driveway. Which means the berries ripen, fall off, and make a vinegary sludge an inch deep.

I know it’ll be a challenge, but this summer I’m hoping to improve upon this setup. Last year my friend Tommy and I got our act together enough to collect one crumble’s worth of fruit, with some heavy 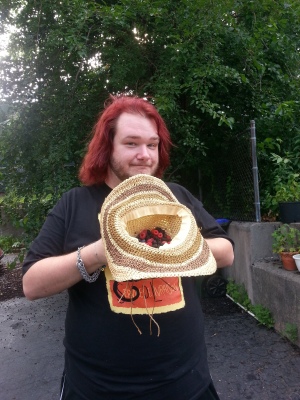 supplementation from other berries scrounged from the community garden and the woods. We called the crumble Fruits of the Forest, and my hat still has stains.

This is a year of proactivity, however, so my plan is to collect the ripe berries daily and freeze them, hopefully accumulating enough to make mulberry wine, which I vaguely remember being drunk at a Redwall feast. If not, it’ll be Fruits of the Forest time again.

As you can see, the invasion has already begun in earnest. 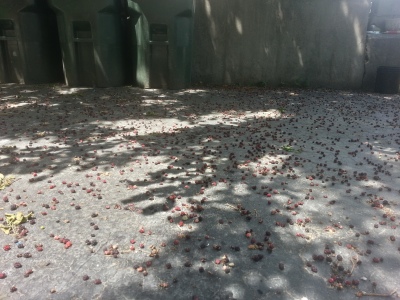 Twice now I’ve gotten out the hose and blasted them into the street, but by the next morning they’re always back in about this thickness. I don’t want to scavenge them off the ground, since they don’t handle the impact well and start to smell vinegary pretty quickly. I’ve had dreams of hanging hammocks to catch them, but with the bird traffic around here I’m afraid I’ll catch just as much poo. 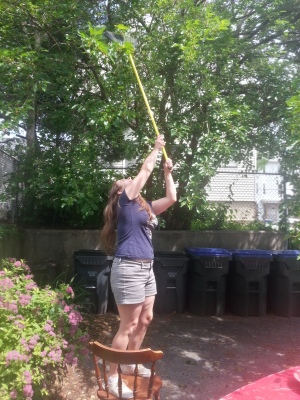 I don’t have any pictures of the actual event, but here’s a lively re-enactment.

My roommate’s mother visited recently, and she was having flashbacks to shaking mulberry trees in Iran with a big sheet held out to catch the berries. I adapted this method by laying out a bunch of newspaper and whacking the tree with a broom. It was not a booming success. I took out just as many unripe berries as ripe ones, and when they hit the newspaper most of them bounced or rolled away. 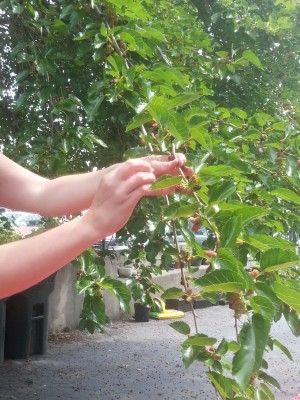 In place of that technique, I’m now opting for hand-picking. I find it strangely soothing.

Since our driveway is Birdtown, USA, my initial plan was to pick the berries when they were nearly ripe, then let them sit on the counter for a day or two before freezing them. The birds and I have formed a strange truce, though. They ravage the top branches and leave the ones I can reach, so the berries I’ve been collecting are actually nice and ripe. I’ll have to look into this bond I’ve apparently formed with the natural world and use it to my advantage somehow. 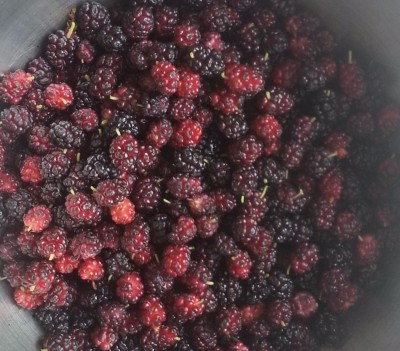 So far I’ve collected and frozen 5 1/2 pounds of the things, and the tree is showing no signs of stopping.

3 thoughts on “A Mulberry Invasion”