I didn’t even plant fennel.

My neighbor in the community garden grew fennel last year, and it went forth and multiplied. Which is how I wound up with seven hardy volunteers in my plot this year. I would have pulled them, but they looked so happy and healthy (happier and healthier than a lot of my own vegetables) that I kept them. Besides – why turn down free fennel?

Unfortunately, as time went by, the fennel got so happy and healthy that it was shading everybody else. I wanted to get rid of it, but didn’t have the heart to do it before the bulbs formed. Finally, nature took pity and made the decision for me. An especially hot week made all the fennels begin to bolt at once. I’d read that the bulbs of bolted fennel are terrible, so I went down one night and gleefully ripped them all out of the ground. I left one, which I thought I might harvest for seed.

The next day was a lazy Saturday – dark and raining intermittently, it wasn’t a good day to set out far from the house. It was a good day for cooking, and I was suddenly fennel rich. I scoured the internet for something unusual I could do with fennel, preferably a dessert. I found exactly what I was looking for in this Candied-Fennel-Topped Lemon Cake. I wouldn’t even have to go to the store.

This cake was fascinating to make. I brought the fennel bulbs to a boil on their own, then drained them and simmered them with sugar, lemon zest, and fennel seeds. This step smelled amazing, and allowed me to indulge an age-old fantasy that I’m a 14th century monk who tends the abbey gardens and cooks up balms and cordials. Anyway.

In the meantime I mixed up a simple buttermilk cake batter with lots of lemon zest. The one resounding complaint in the recipe’s reviews was that this lemon cake barely even tasted like lemon, so I scraped clean all one and a half lemons I found in the fridge and came up with about double what the recipe called for. I’ve always been a proponent of extra lemon.

I lined a round pan with parchment paper and oiled the heck out of it so my sugary fennels wouldn’t glue themselves down. My pan was wider than the recipe’s so I got this courtyard in the middle. The recipe also said the pan could be filled with a single fennel bulb, cut lengthwise into 1/4 inch slices. Mine took five. And “bulbs” might be a bit of an overstatement. I filled my pan with five bottom parts of fennel plants, cut into 1/4 inch halves. Then I reduced the syrup I’d simmered them in and poured it over.

I added the batter on top of that, then baked it for half an hour, which turned out to be the perfect amount of time for this pan. It smelled… mostly good while baking. Definitely interesting. It did smell like there was a competition between the generic sweetness of the cake and the herbiness of the fennel. The smells didn’t exactly mesh. 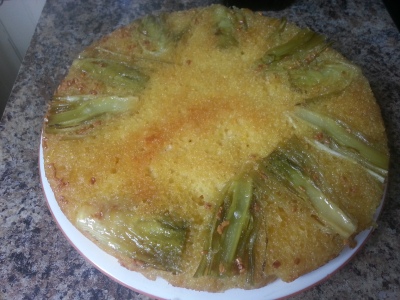 The cake came out of the pan with no incident and looked… pretty weird. Like someone had thrown a bunch of vegetables on top of a perfectly good cake. Which they had. And one of the fennels drifted away, ruining my thrown vegetable symmetry. Oh well. The taste made up for it, right?

The taste did not make up for it.

This was one of the worst things I’ve eaten. The sponge was fine, and I’d say double lemon was the right amount of lemon. But the fennel seeds snuck up on me. I thought they would have softened, but they were still hard, and with every other bite I’d hit one or two. They were tasteless until bitten down on, whereupon they’d release a flavor I wouldn’t even classify as “fennel.” I’d just call it “bad.” The fennel itself, despite all that simmering, was still just a vegetable, and so tough. I had to eat this cake with a knife and fork, and even in manageable pieces the fennel was sometimes unchewable. Granted, I might have chewed longer, but I wanted it to be in my mouth for as little time as possible.

I am not a picky eater. I like eating almost everything, and I will try absolutely anything. But I’ve never liked anise. I thought that baked, with lots of lemon and sugar, it would be different. I thought I could gain an appreciation for it. I was wrong.

I’ve dared roommates and visitors to try it, and they haven’t given it nearly such a bad review. They’ve called the fennel “a little chewy but good.” It’s still with us four days later, but it’s almost half gone, so somebody’s been eating it. Maybe it’s not as objectively bad as I thought, but if you don’t like anise, it is subjectively horrible.

I ripped out that last plant in my garden. I don’t think I need to save any seeds.

2 thoughts on “The Worst Cakes in Providence”