Two weekends ago I set out to bottle my amber ale. The recipe called for ten days of fermentation in the primary fermenter. I’d given it thirteen. If anything, I was worried I was behind. So I scrounged up about fifty bottles and sanitized them, and I found someone big to lift the carboy up onto the counter.

And then I actually looked at the beer.

It was still bubbling. Quite a lot. The krausen had fallen, and there was a lot of trub on the bottom, but there was also a very, very steady upward movement of tiny bubbles. It was just like the mead that I’d decided would be impossible to bottle.

But I wanted so badly to bottle this beer. I’d scrubbed and sanitized the bottles. I’d schlepped the carboy out of the closet. I’d prepared mentally. But it really, really looked like it was still fermenting.

I read the forums – they said to wait. I called my friend Joe who actually knows what he’s doing – he said to wait. I polled my roommates – they didn’t know the specifics, but they were in favor of doing whatever wouldn’t result in exploding bottles. Namely, waiting.

And so, with a heavy heart, I waited. I dumped all the sanitizer and I wedged the carboy back in its corner of the closet, and I waited… until today!

I waited ten more days in all. If anything, I probably should have racked it to a secondary fermenter, but I never anticipated it taking so long. My best guess is that the cold weather is to blame. Since the house is so cold, and we never did get the PID controller space heater working, the yeast may have just been working at a cooler temperature and, therefore, more slowly. At any rate, the extra time seemed to have done it good. There were, if we’re being totally honest, still a few bubbles. But it was nothing like last time, so I declared it to be Good Enough.

The bottles had been biding their time around the sink – I sanitized them and finally reclaimed that counter space for mankind.

One by one I filled the bottles with sanitzer and gave them a good shake. I always use Star San, famed for its sanitizing foam. This was a good instance of that foam coming in handy – only a little bit of liquid (supposedly) sanitizes a whole bottle.

My tall auto siphon had given me so much trouble racking the mead, but I needed to use it again. Thankfully, I managed to find a length of tubing that fit and was not kinked all to hell. With a little cutting and finagling, I managed to fit it onto my auto siphon. It worked like a charm.

I’ve read about methods for racking beer without picking up the trub. These include swirling, starting the siphon in a separate container, and trusting in the raised bottom. I’m sure these all work, but I’ve discovered a certain poetry in just jamming a knife in the top.

With my trusty knife method, the beer flowed smoothly and quickly down into the priming bucket, the bottom of the siphon resting safely just above the trub. As it flowed, I dissolved 2/3 of a cup of sugar in 2 cups of water and poured it gently into the beer. This should get the yeast motivated just enough to carbonate the beer in the bottles.

Once all the beer was in the priming bucket, I gave it a few stirs to incorporate the sugar and hefted it up onto the counter. Onto the other end of my great new tube, I attached a bottling wand. This bottling wand either came from a Craigslist stranger or my dad – I inherited a lot of miscellaneous equipment from both. I’d never used it before because wouldn’t fit with my small auto siphon. I used it today for the first time and Good God Almighty is it convenient. It’s a ten inch stiff plastic tube with the simplest but best little gizmo on the end. If the gizmo is pressed against a hard surface, like the bottom of a bottle, it allows the beer to flow through it freely. If it’s not touching a hard surface, however, it forms a seal that stops the flow. This means the moment a bottle is full, you can lift the wand and stop the flow, only starting it again when it’s in the next bottle. It’s so smooth and simple and I’m never ever going back. 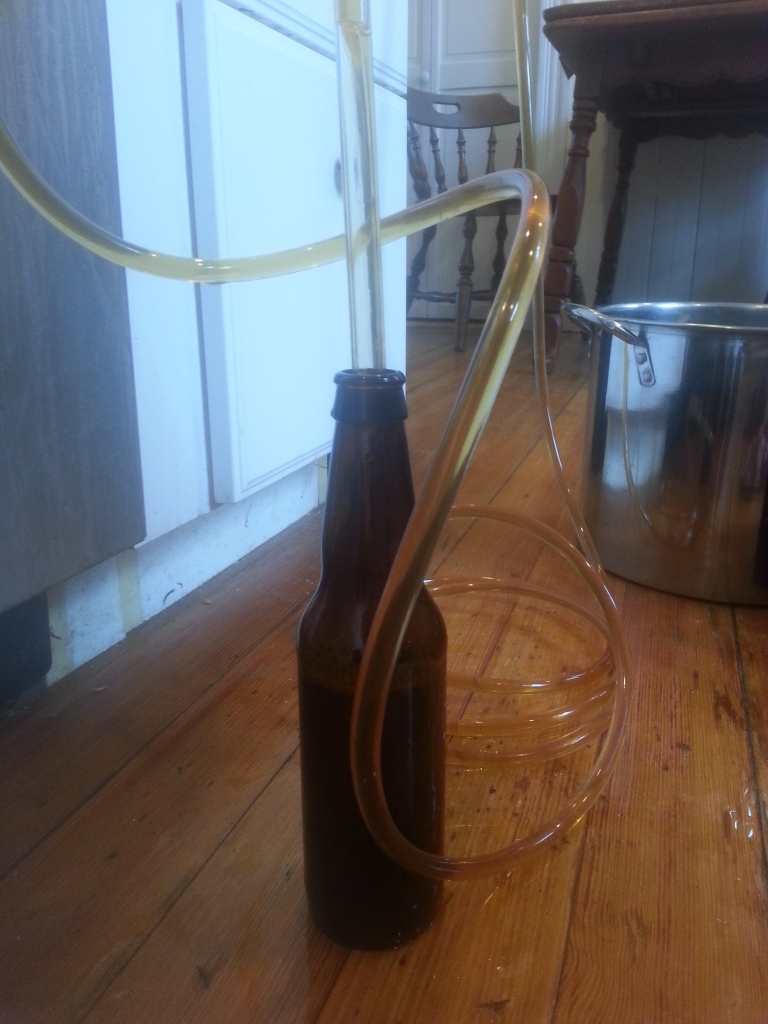 So how many bottles does 5 gallons of beer make? Here we have 50 regular bottles, plus 2 bombers, plus one more I managed to fill from the dregs after this picture was taken. That brings us to a grand total of 55. All that remains is to let them sit in the dark and carbonate. 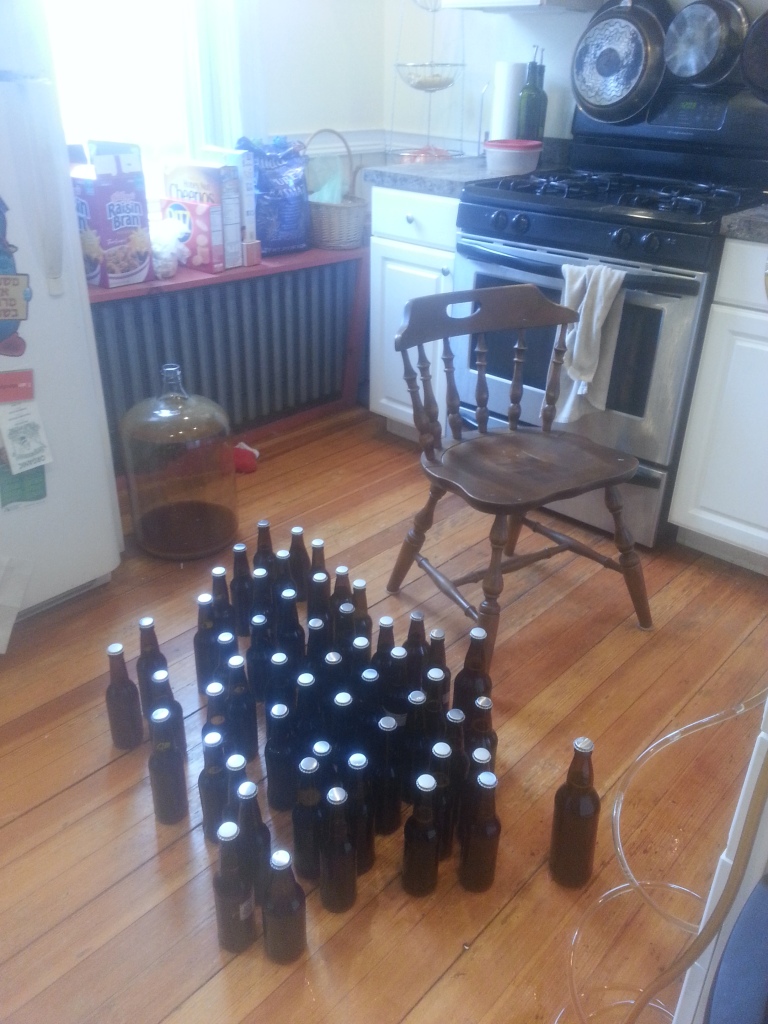 But how does it taste? Really, genuinely good. I sucked the remains out of the tubing while I was cleaning, and I was very pleasantly surprised. It’s not too sour, and it’s not too boozy. It tastes like a real, very flat beer, which is precisely what it should taste like. Barring some crisis in the next few weeks (of which there could be many) I think I may have a huge amount of perfectly passable beer. 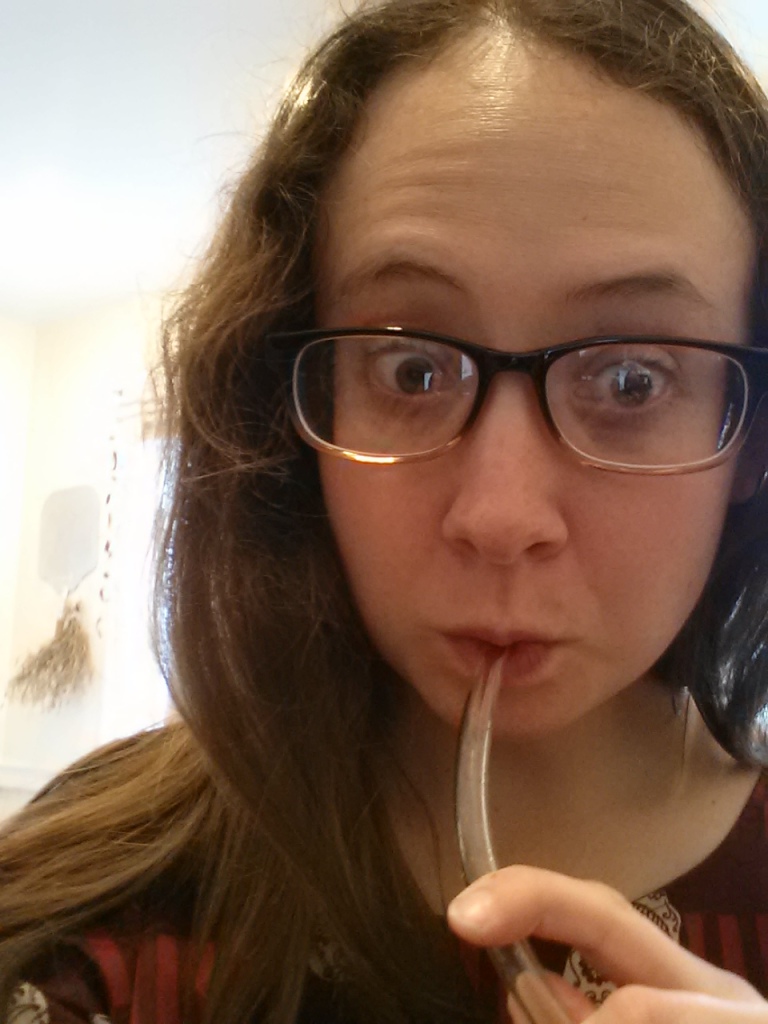 I just hope it doesn’t explode.