Last weekend a pilgrimage was made.

Defying all odds that we wouldn’t get our act together, Ben, Will, Phil, and I drove six hours to Pennsylvania to make maple syrup with my dad. 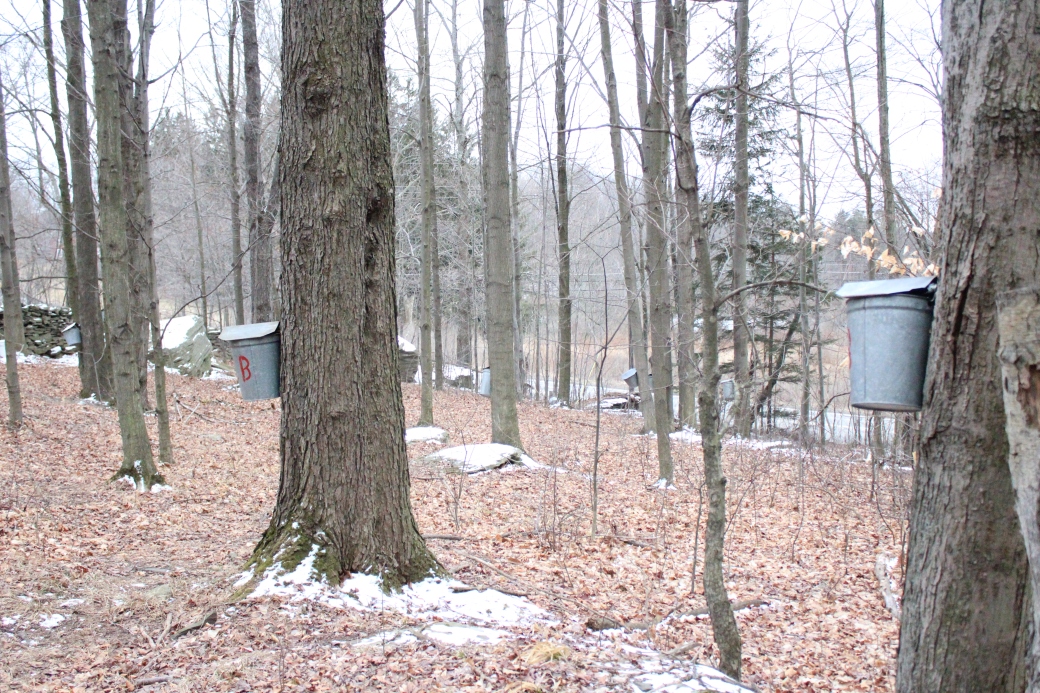 When I was young, I loved the Laura Ingalls Wilder books. The first, and arguably the coolest when you’re a little kid, is Little House in the Big Woods. It’s a non-stop festival of rough-hewn timber, smoked hung meats, and maple syrup. One spring my dad and I decided to recreate the maple syrup chapter in our own not so big woods, and a tradition was born.

Of course I got older and too cool for projects. Then I got even older and moved away. My dad has kept on boiling sap, though, tapping the trees every three years or so to replenish supplies.

This winter the syrup stash was running dry, and my dad hinted that he’d love some help. There were rumblings of interest among my friends, and by golly four of piled into the car and drove well into the night to help (read: watch) my dad make syrup. 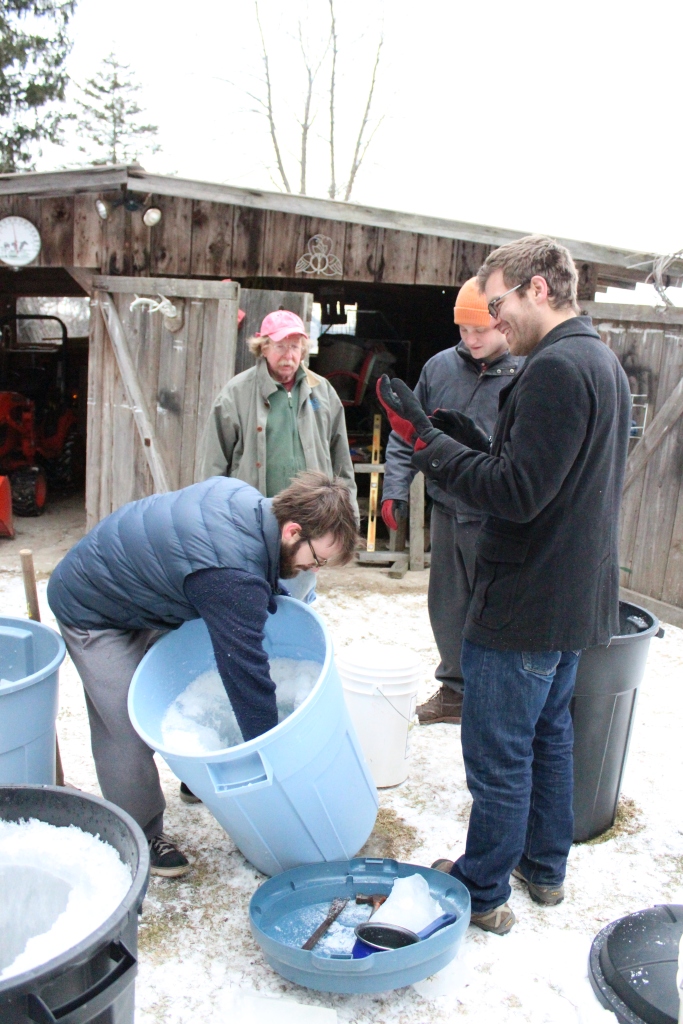 On Saturday morning we woke up bright and early, but my dad was up much brighter and earlier getting the fire started. He stacks two rows of cinder blocks and builds a fire between them. The fire goes strategically next to the patch of bamboo that’s been trying to take over the garden for the past twenty-five years. It’s part scorched-earth policy and part threat – he throws some dug up bamboo roots on the fire where the rest of the patch can see it.

The pans are legitimate maple syrup boiling pans, bought off of someone or other when I was a kid. Who knows how old they are. The wider, flatter one on the left is for boiling down new sap. Every now and again the sap on the left is transferred to the deeper pan on the right, where it continues to boil and refine. 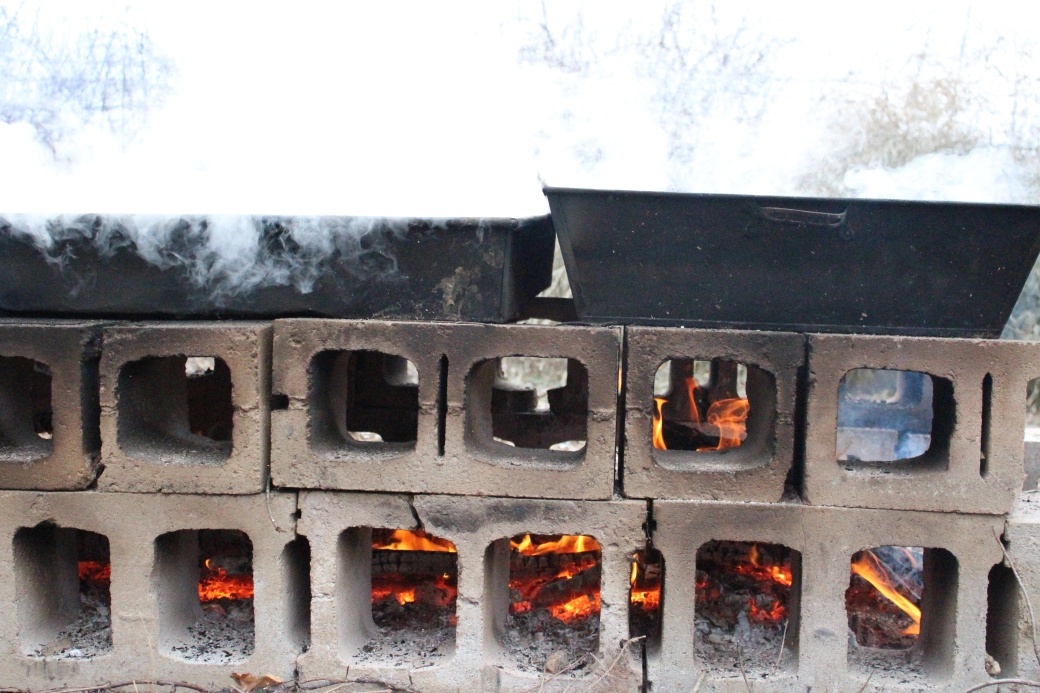 My mom thinks it’s just the right size for a funeral pyre and worries what the passing cars must think. 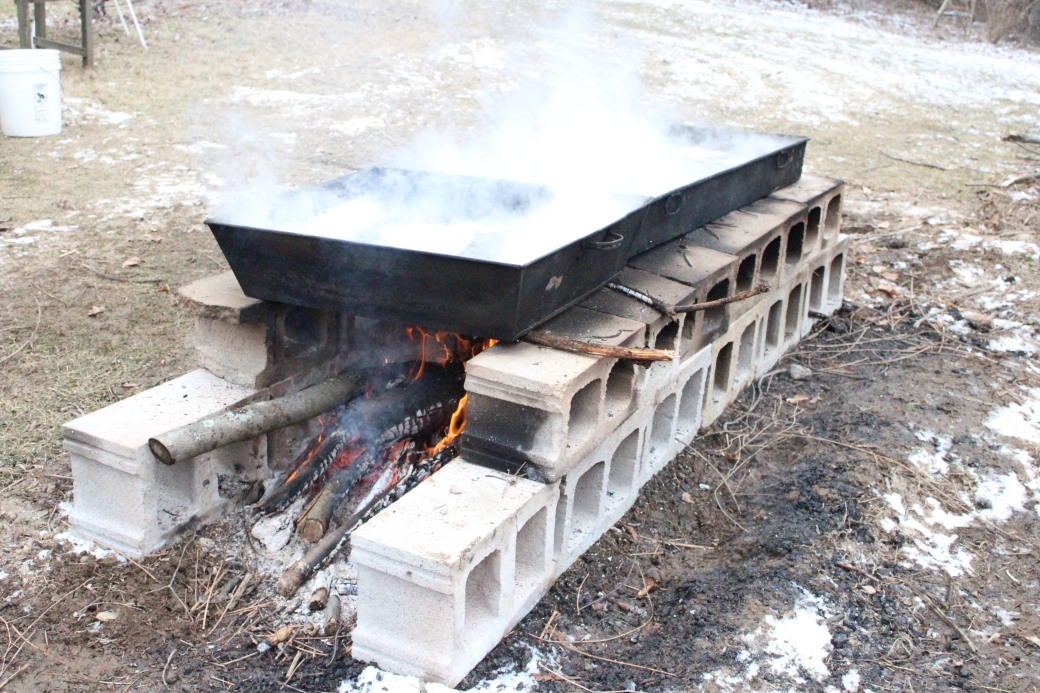 With the weather so unseasonably warm, my dad was getting overrun with sap. Late winter and early spring is the time to tap trees, when night temperatures are low but day temperatures are relatively high. This see-sawing is what really gets the sap flowing. Days up in the 50s and 60s really get the sap flowing, apparently, and he was quickly running out of space to store it all. To make way for more sap, he did a boil the weekend before, producing about a gallon of syrup. To build up our strength for the day ahead, we made blueberry pancakes and bacon to enjoy with some of last weekend’s bounty. 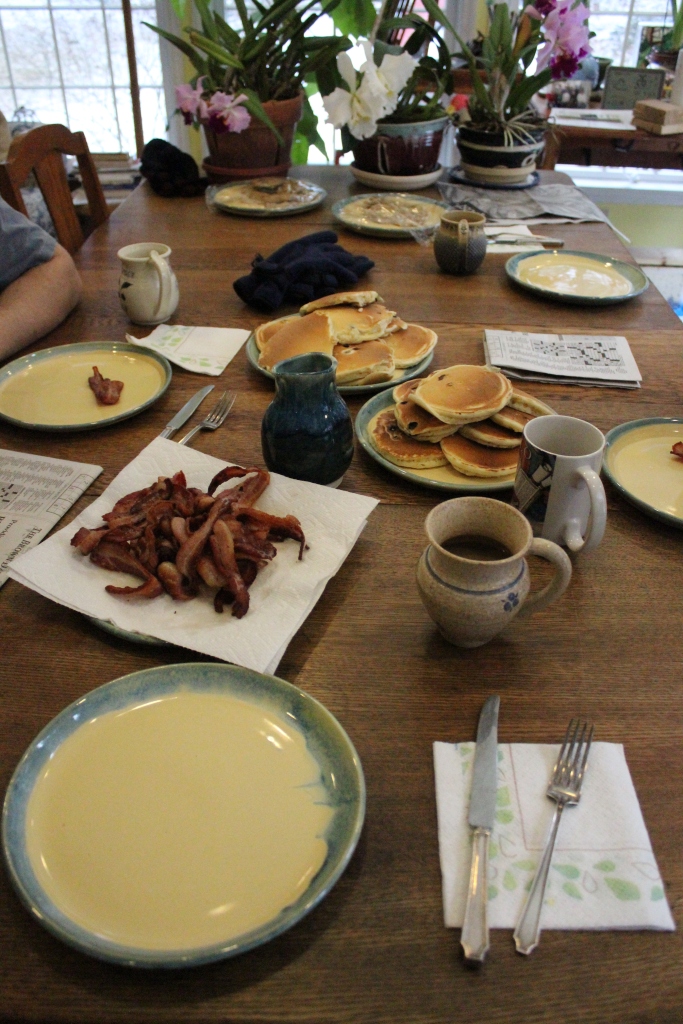 All fueled up, we got to work. The Baessler Estate is about two acres, which is small as Estates go. It’s rich in sugar maples, though, and more than big enough to sustain my parents’ pancake habits. As this was an educational trip, my dad showed us how to tell a sugar maple apart from a regular maple. It’s all in the tips – the buds of a sugar maple end in sharp points, like these. Regular maple sap can be made into syrup, too – it just won’t be as sweet. 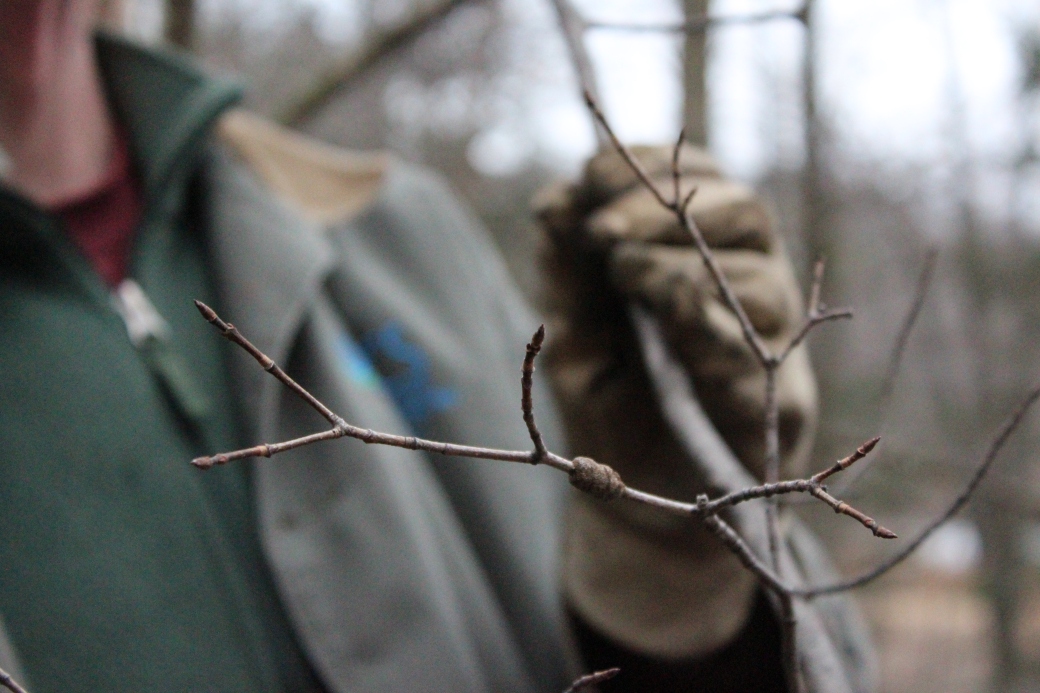 Our lesson learned, we took off into the woods to collect the remaining buckets. This tree has two obvious holes from past harvests. It’s been tapped this year using the hottest new plastic technology. 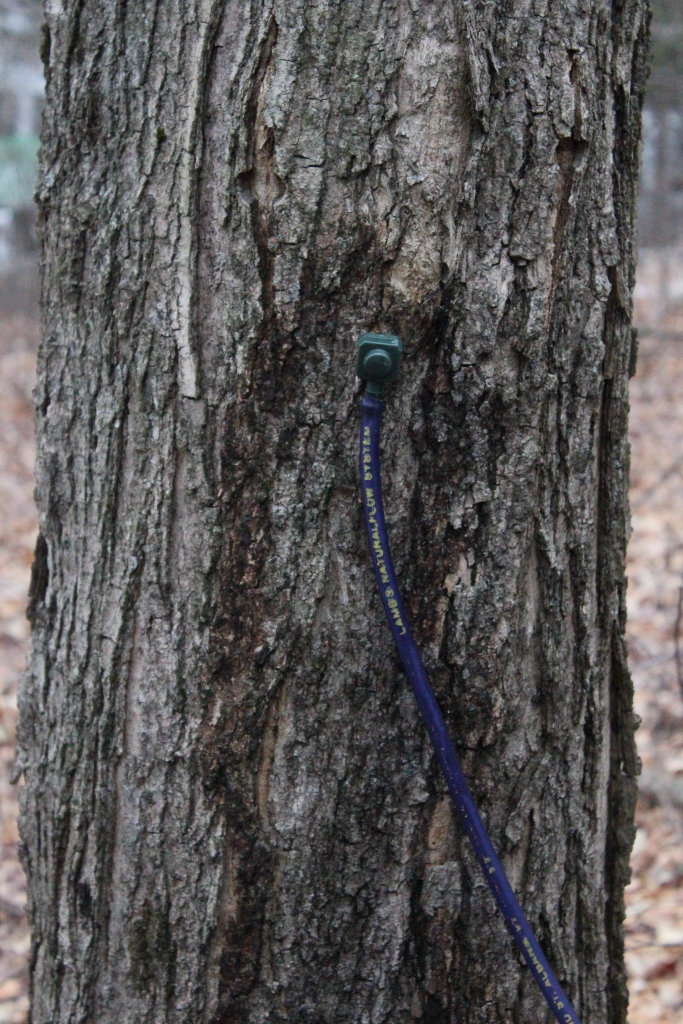 Most of the buckets are these old fashioned aluminum ones that hang directly from the spout and have cute little hats to keep the snow out. These too were bought when I was a kid and we wanted an authentic Little House operation. 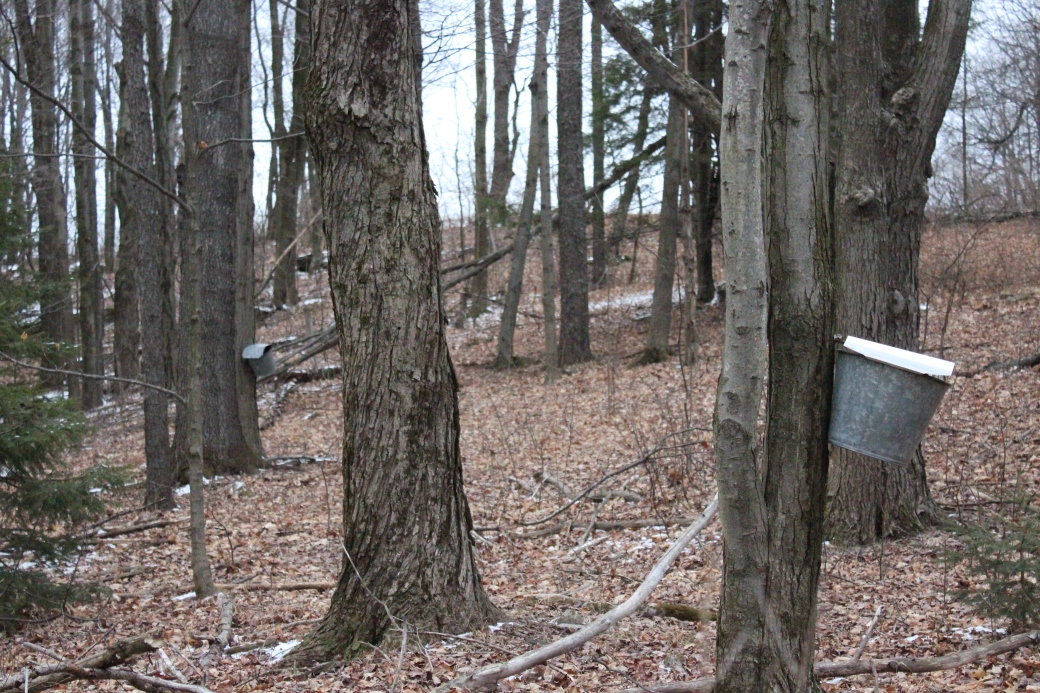 We trooped around collecting buckets. By a stroke of luck, all the sap was frozen solid.

This made all the buckets nice and stackable. 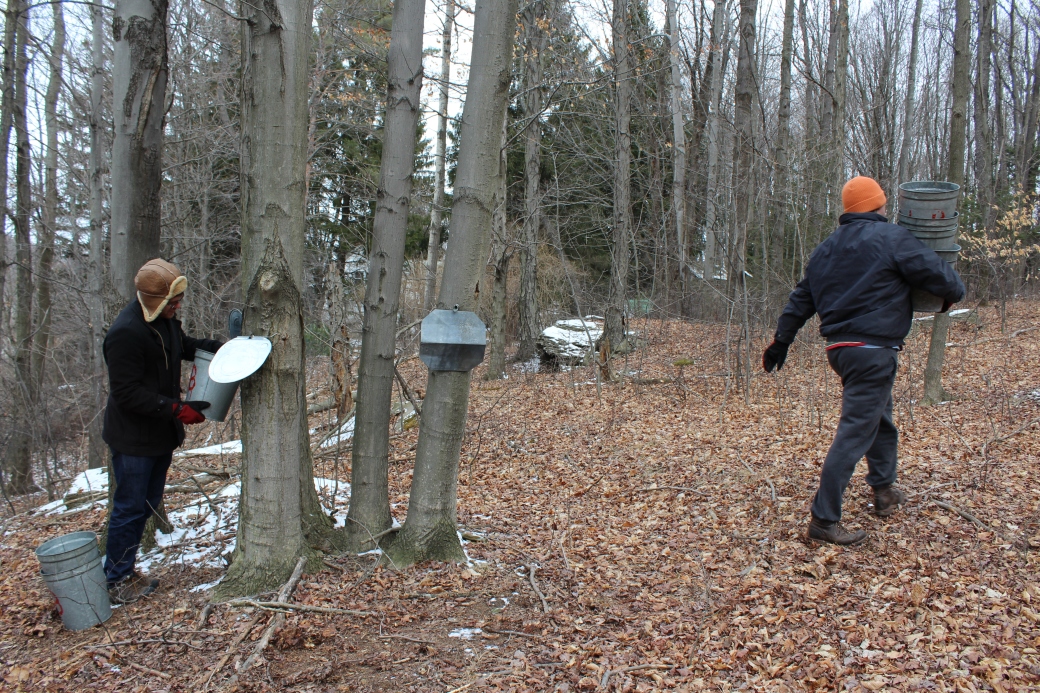 On top of being frozen, the little buckets weren’t particularly full. They’d all been emptied the week before for the first boiling. Each of these is, then, about a week’s sap production for a single tree. 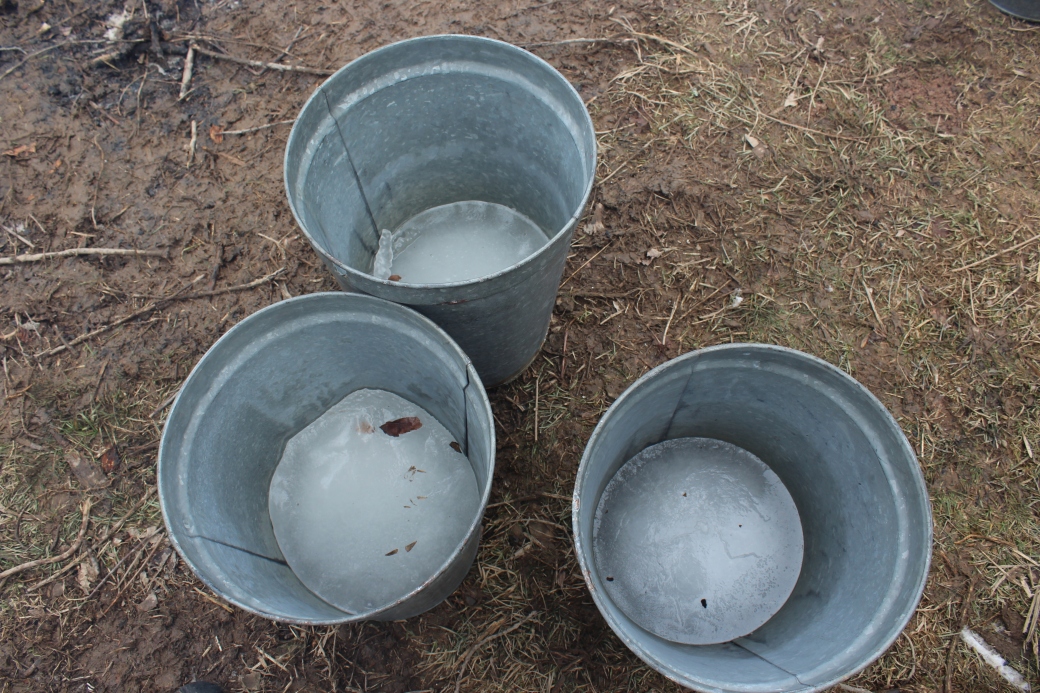 We set the buckets by the fire to loosen the ice, then dumped them into the flat wide pan. 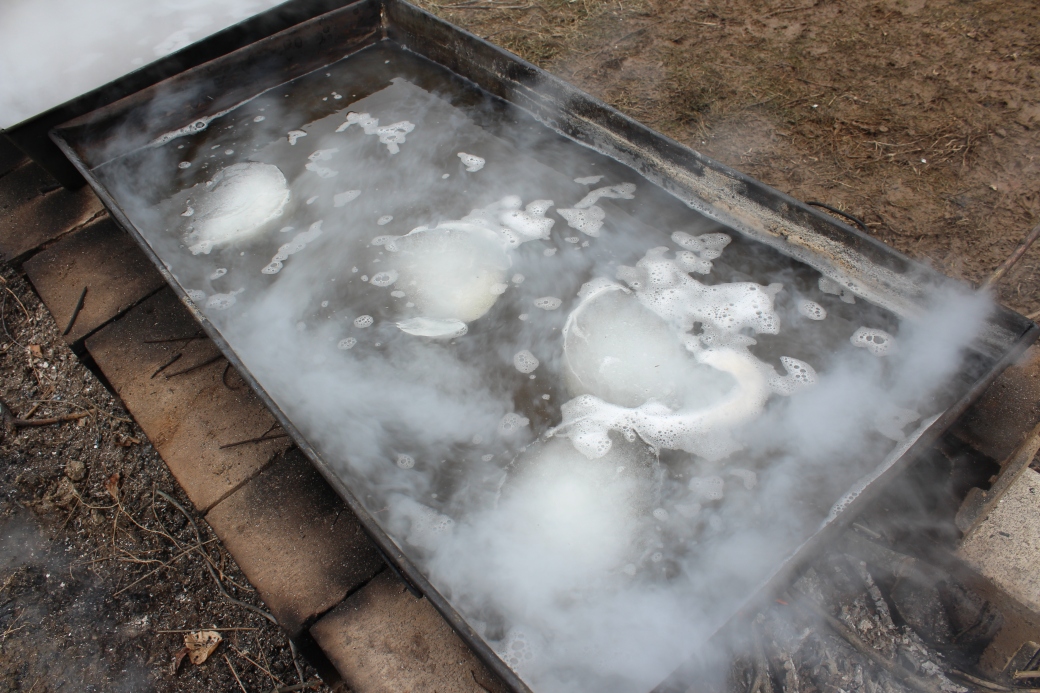 The real money, however, was in the big trash barrels. A couple of the larger trees were plugged directly into these. They also served as the storage tanks for when the smaller buckets filled up. We had a couple hundred gallons of sap in these barrels, and it was all frozen. 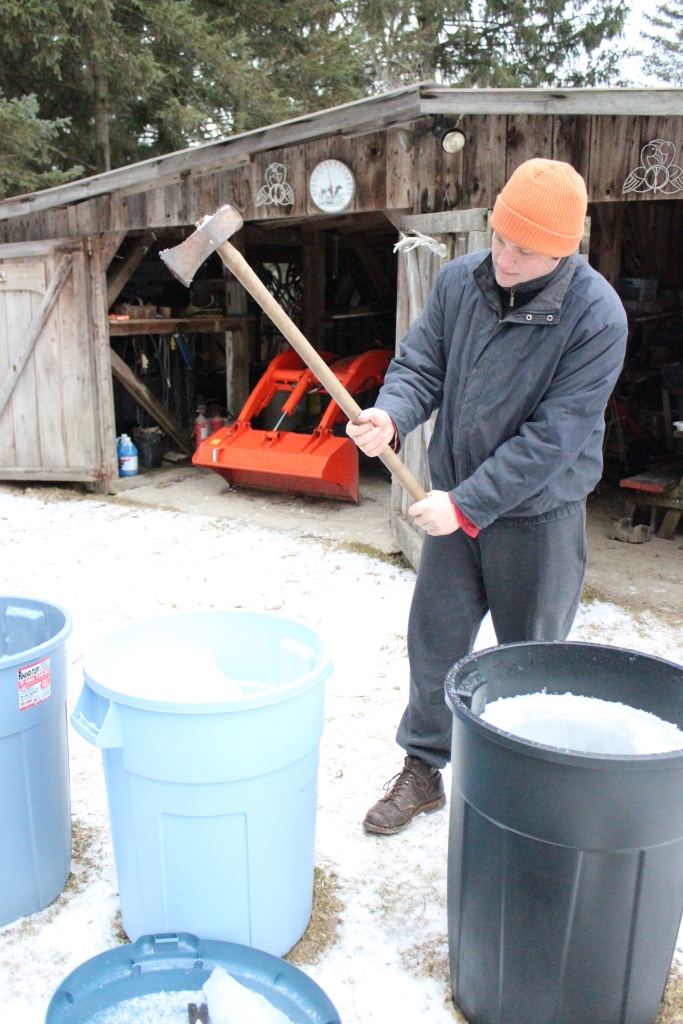 The hope was that if we hacked at it long enough with the ax, we’d hit a liquid center of much purer sap. By leaving it out to freeze, we were essentially distilling – separating the frozen water from the liquid sugar. 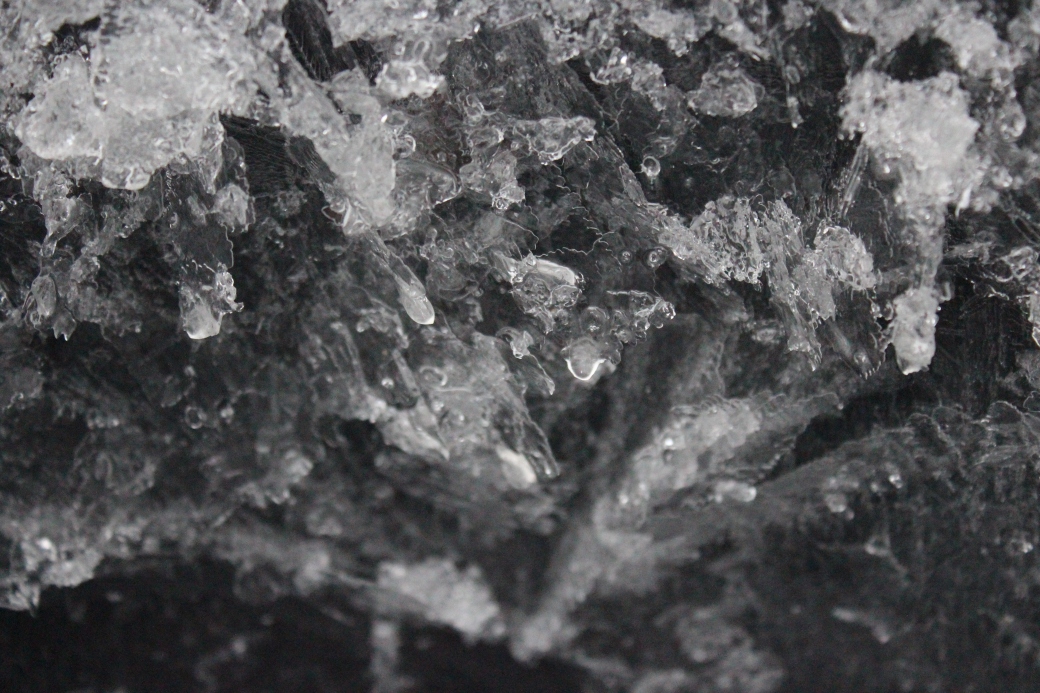 After some serious hacking, we did hit liquid. A taste test proved that it was indeed a heck of a lot sweeter than the ice. We scooped the liquid into the pan and threw the frozen to the elements. Did we lose some sugar to the ice? Probably. But we were burning daylight and this felt like a lucky break. 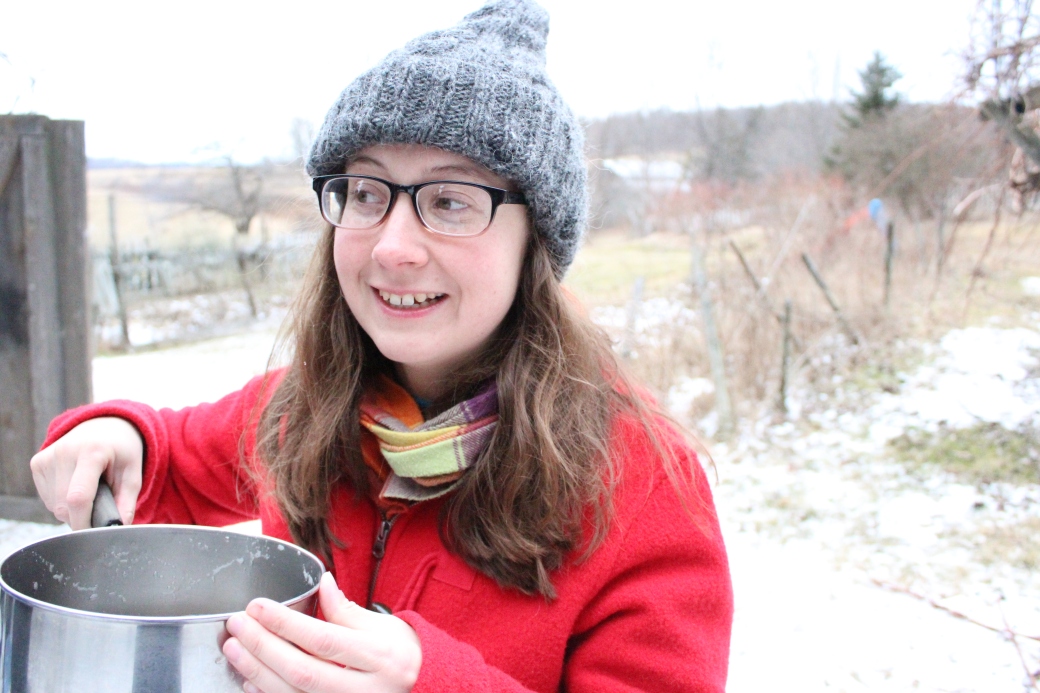 With all the sap in the pans, it became a boiling game. So really a waiting and fire-tending game. All in all it’s a process of about ten hours. 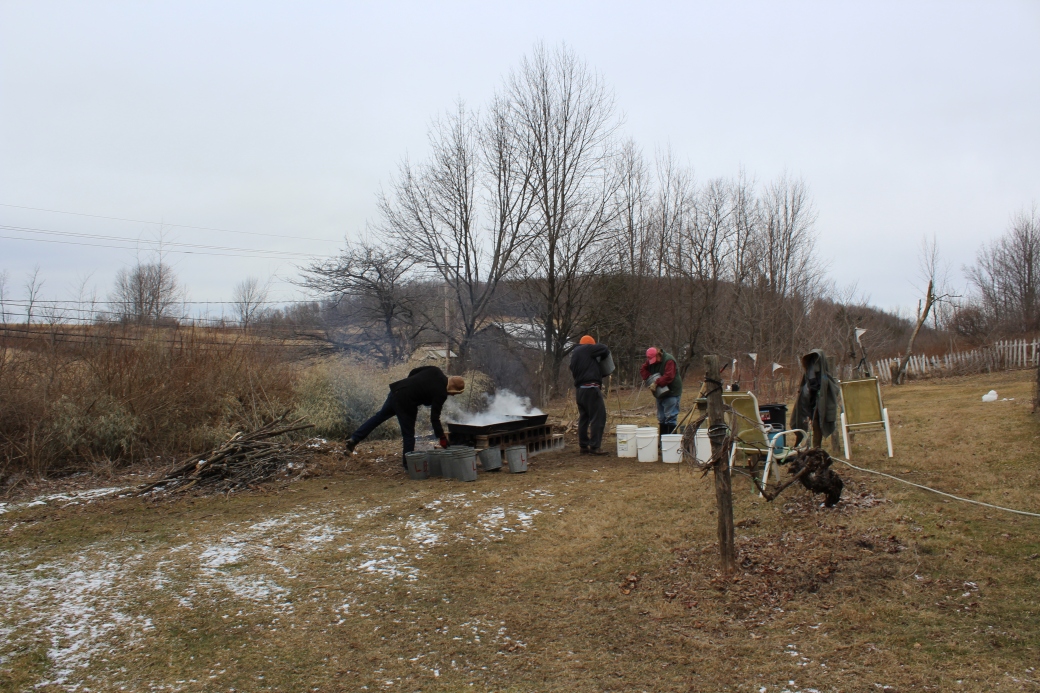 At my mom’s suggestion, we split up the day with a field trip to my cousin’s commercial maple syrup operation down the road. It was a day packed with educational experiences. Too packed for one blog post. Join us next time for a look inside a real working Pennsylvania maple syrup sugar shack. 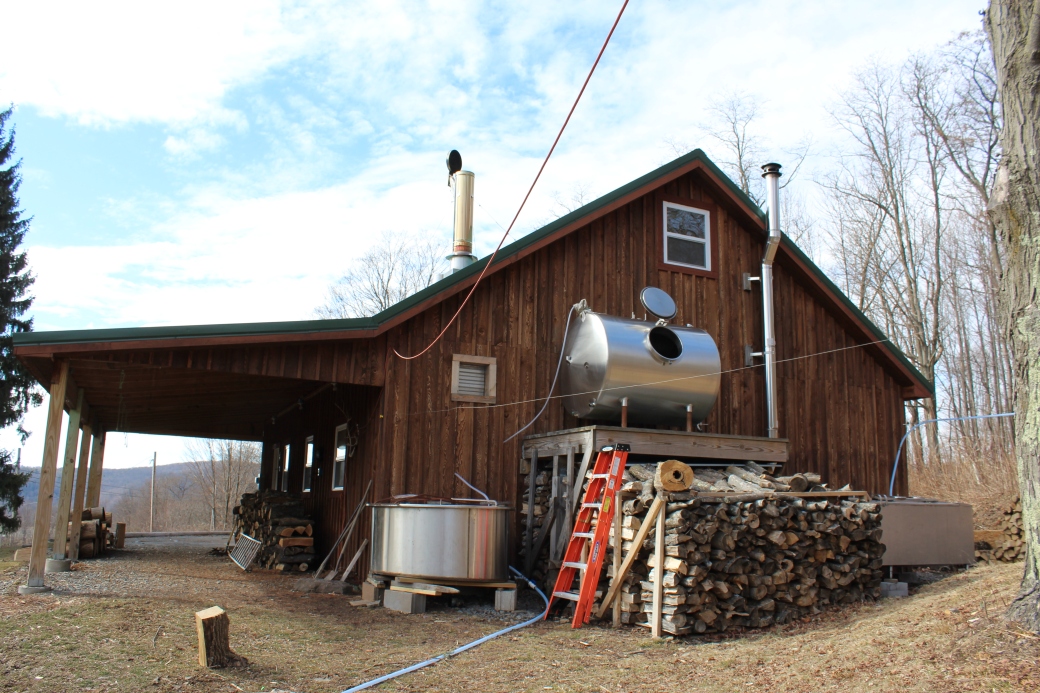 And the time after that for the stunning conclusion to Maple Syrup on the Baessler Estate.

4 thoughts on “Maple Syrup on the Baessler Estate”