I was pretty worried about the bees.

We moved them in on a cold, wet day, and the days after just got colder and wetter. We’d planned to peek in on them on Saturday, but because of the cold we pushed it back to Sunday, which was also cold. And wet.

It was a bad week for bees all around.

Despite the weather, we had to check on our queen. My parents were visiting, so my dad acted as photographer and my mom, to her credit, spent her Mother’s Day standing in the drizzle watching me play with bees.

I did make her brunch afterward.

The bad weather had me worried. I’d gone down the day after installation and didn’t see a single one. Normally after moving into a new home, the workers will fly around and around the entrance orienting themselves. The temperature was in the 40s, though, when no sane bee would leave her home. It made sense not to see them, but I didn’t like that I couldn’t.

I put my ear up against the side of the hive – I thought that if I could hear buzzing, I’d at least know they were alive in there. But I couldn’t hear a thing. I was prepared for the worst.

But I didn’t need to be! The bees are not only alive, they’re productive! They’ve already started drawing out comb!

The queen is alive and has been naturally released from her little cage. We spotted her crawling around on a frame.

They haven’t taken very much of the syrup – the jar was still mostly full. We’re not overly worried, though, since we started them with a few frames of pollen and honey from last year. It makes sense that they’d want to eat that before sugar water. 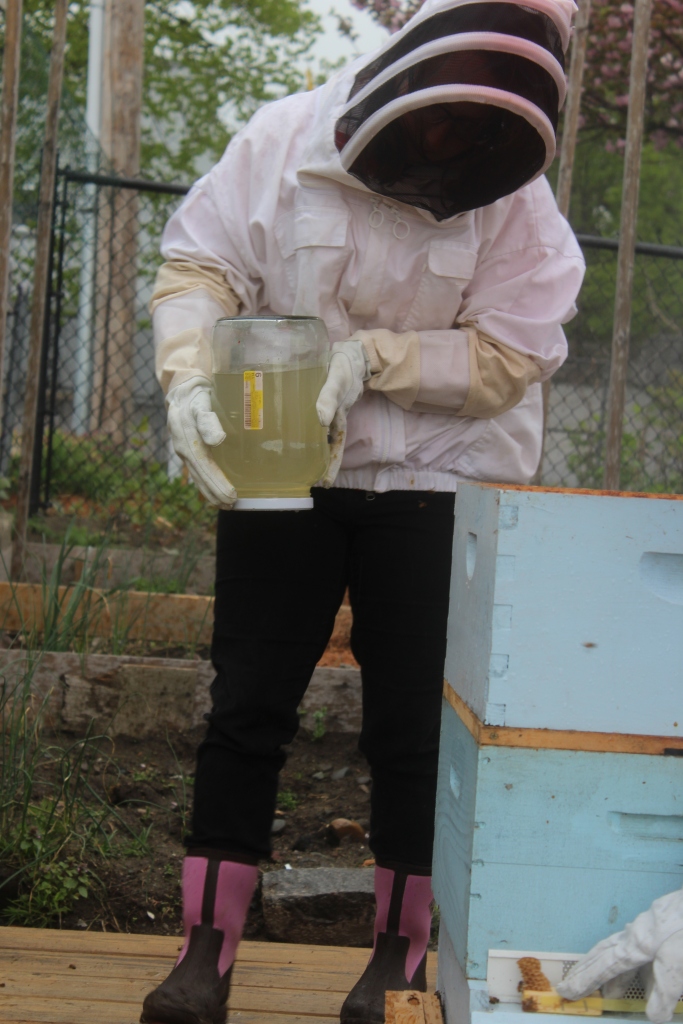 Since it was raining, we closed up shop as soon as we found the queen. One of these days it’ll be nice enough to do a real inspection. For the time being, we confirmed everything we needed to – the queen was free, she’d been accepted, and the workers were working. We put the syrup jar back in place and popped the lid on top.

I was down just this afternoon, and the bees were flying around happily. They weathered the storm and should have a warm, sunny week ahead of them.

If you’re in the garden, stop by and say hi!

From a safe distance, of course.

3 thoughts on “Happy as a Bee”