I am on a wine kick. I’m not sure where it came from. A year ago my roommate and I made a mostly successful IPA from an ancient graduation gift beer kit. Since then we’ve made two more downright drinkable beers from Brooklyn Brewery kits, 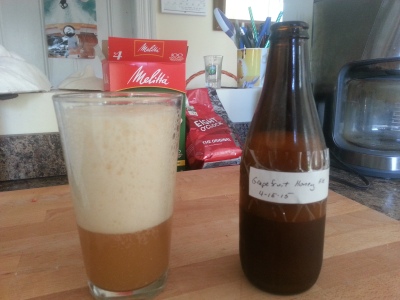 although I think I may have overdone it on the carbonation… Look at that head!

I’ve been itching to make something more homemade, though, and since it’s June, fruit wine seems like a good direction to go. I bought this fabulous 6 gallon carboy off a very nice craigslist man, along with a 6 gallon bucket with a grommeted lid and more supplies than you can shake a stick at, all for $40. 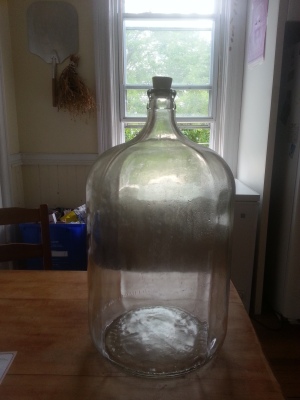 It’s a lot of responsibility, coming up with a wine I can afford and am confident I might like enough to make 5 to 6 gallons of the stuff. I’ve settled on mango wine, mainly because mangoes were on sale and are a heck of a lot cheaper than berries. I will be following this 32-year-old recipe from the Rare Fruit Archives of Australia because it’s the first one I found that sounded doable. And because I like the sound of it.

That will be a separate post, though, as I’m still waiting for the champagne yeast to come in the mail, and I’m typing with my feet drawn up on my chair because there are twenty pounds of mangoes softening in paper grocery bags under my desk. Until then, a quick look around at the operation I’m trying to get going.

No one has lived in the apartment below ours for a year now. 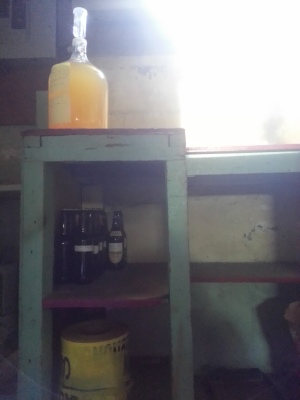 This means their basement storage room is unoccupied, apart from all the junk they left behind. Until someone new moves in, I’m appropriating it as my wine cellar! There’s a great, reasonably dark shelf for finished bottles, where I’ve put what’s left of the beer. And another, darker shelf for all that caution tape the neighbors were hoarding… 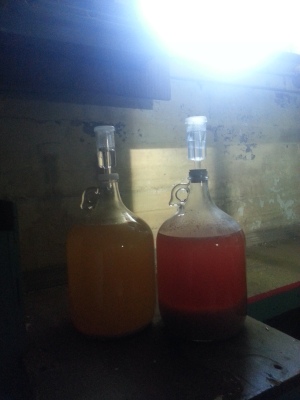 down here already. I brought them out into the light for a photo-op; they’ve been living off to the left of the frame in a dark corner. I’ve read many a forum argument about whether dark is necessary for wine or just an old wives’ tale. The jury appears to be out, but I figure if I’ve got the dark I might as well use it.

The pink fermenter on the right is a strawberry wine. When I transferred it from its primary vessel I had a terrible time separating the liquid from the berry sludge that formed, and now I have a pitifully shallow fermenter that still somehow has a ton of sediment. When I rack it again I’ll have to decide if I make up for the lost space with water or just move it to a half-gallon jug.

The yellow fermenter is mead that I’ll be racking as soon as the bubbling dies down. By the numbers it should be any day now, but the yeast is still going strong. 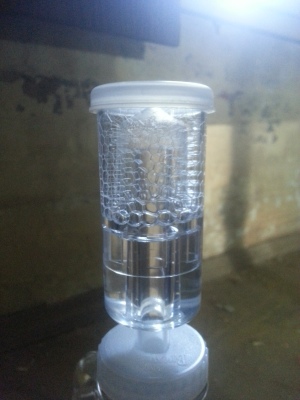 The bubbles in the airlock have actually formed a very cool honeycomb pattern. For a while I had a half-baked idea that this had something to do with the high honey content. And then I found the same pattern in the strawberry airlock.

And then I realized that idea was ridiculous.