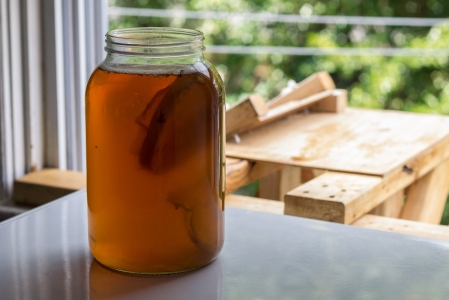 I didn’t know what kombucha was when I made it.

My friends Keri and Justin from the community garden invited me to their house for a festival of fermentation. I gave them wine. They gave me a sourdough starter, a ginger soda starter, and a kombucha starter. Tragically, the sourdough went bad in a way I’ve never seen anything go bad before. The ginger is still lying in wait. But with the kombucha I went ahead full throttle.

If you notice that some of my pictures actually look good, it’s because they were taken by my friend who has a real and very nice camera. Go see his other stuff on Flickr. Tell me which photos were taken on my phone as per usual and win a prize!

I learned everything I know about kombucha as I was making it. It is, essentially, fermented sweet tea. At the heart of that fermentation is a thing called a SCOBY. This stands for Symbiotic Colony of Bacteria and Yeast. Why not SCOBAY? Your guess is as good as mine.

Here’s a bird’s eye view of a SCOBY I grew all by myself. It’s about five inches across. I grew it myself because – and here’s the catch – every time you brew a batch of kombucha, you grow a brand new SCOBY. Often people don’t have the heart to throw them away because, well, they’re little guys! So they store them up in jars called SCOBY hotels and find people to pawn them off on.

When Keri told me, via text, that she had a SCOBY hotel she wanted to share with me, it never even crossed my mind that I wasn’t looking at a typo.

Pawning off is of course an unfair term. I was more than happy to take this disgusting little critter into my home and drink the fluid it lives in. And I’m fascinated by the thought that these SCOBYs are passed and propagated from person to person and mine might have a noble lineage. Maybe I’ll get into SCOBY genealogy.

My housemates were less enthusiastic about this new addition to our home. They’ve long since accepted my weird fermentations. Or at the very least they’ve grown accustomed to them. Kombucha was a step into the unknown, however. And the sight of this slimy, vinegary disc teeming with rapidly reproducing life (as well as the prospect of having to do a taste test) didn’t calm any hearts or stomachs. I reassured everyone that it was perfectly natural and healthy and supposedly tasty. I took it for granted that I was right. 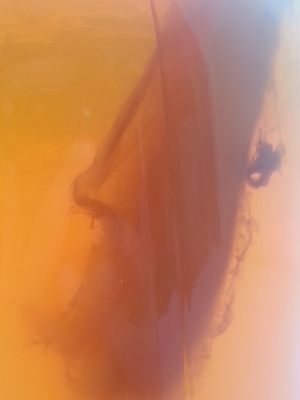 By the by, if anyone out there really knows their kombucha and can tell from the pictures that mine is actually grotesquely unhealthy, let me know, I guess. Here’s one of the SCOBYs drifting slowly from the bottom of its jar up to the top to join with its newly formed offspring.

So what’s the deal with kombucha?

Essentially, it’s fermented sweet tea. It’s often flavored and carbonated to make something like a healthy person’s soda. And boy, is it healthy. Whenever I wanted to read about it online, I’d first have to wade through paragraphs and paragraphs about probiotics and detoxification and anti-oxidants. Is any of it true? All I know is I had a cold, I drank some kombucha, and I still have that cold. Maybe I need to drink more.

The brewing process is excitingly easy. Brew some black tea, add a whole bunch of sugar, and let it cool. Throw in a SCOBY or two and some of the vinegary liquid it lives in, and fill up the remaining space with water. Rubber band a piece of fabric over the top of the jar and let it sit out of the way for around a week. You’ve just made kombucha. 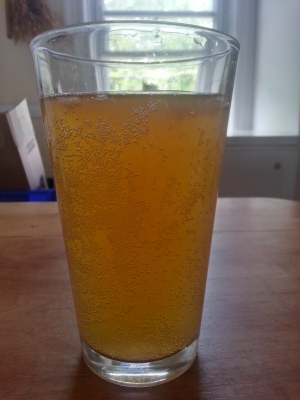 The sheer healthfulness of kombucha culture is a little bit of an obstacle. I read a lot of recipes, and according to every one I needed organic black tea and organic cane sugar, because the chemicals used to process the non-organic varieties can kill SCOBYs. And I had to use filtered water because the traces of lead in my taps would kill SCOBYs. Unfair though it may be, I couldn’t help but wonder if all these delicate SCOBY tendencies weren’t projected by the people who grew them. If I believe city water and non-organic sugar is bad for me, why wouldn’t it also be bad for my yeasts? So after following all the rules the first time, I brewed my second batch with tap water, Lipton tea, and Domino’s white sugar. Maybe my SCOBY felt healthfully bankrupt, but I didn’t notice any difference.

Though it was supposed to take as long as a week, the summer heat kicked my kombucha into overdrive and formed a new SCOBY in about four days. The taste was like a sweet apple cider vinegar. At this point kombucha is 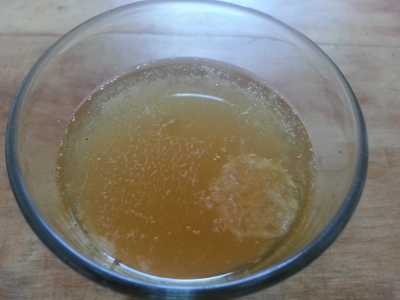 completely drinkable, but I chose to go a step further by doing a second fermentation with flavoring. This involved bottling the stuff in beer bottles with whatever I could find in the kitchen that I thought might taste good. I did lemon, honey, ginger, lemon honey, lemon ginger, honey ginger, and elderberry, to give you a sense of what I had lying around the house. I let the bottles sit out in the kitchen for about four days to allow the yeast to eat the sugars and carbonation to build up. Then I stuffed them all in the fridge to slow the fermentation way down and prevent explosions.

And the verdict? Pretty darn good! You can see from all the bubbles that the carbonation was a success. You can also see from that suspicious circle floating on the top of the glass that a new bottleneck-sized SCOBY began to form in each bottle. One slipped straight down my throat during an ill-fated afternoon refreshment. It was a little like eating a raw oyster.

Sneaky little SCOBYs aside, the overall rating was widely positive.

Even though the good reviews came begrudgingly and with a little suspicion from those who actually saw it made.

One thought on “Kombucha?”